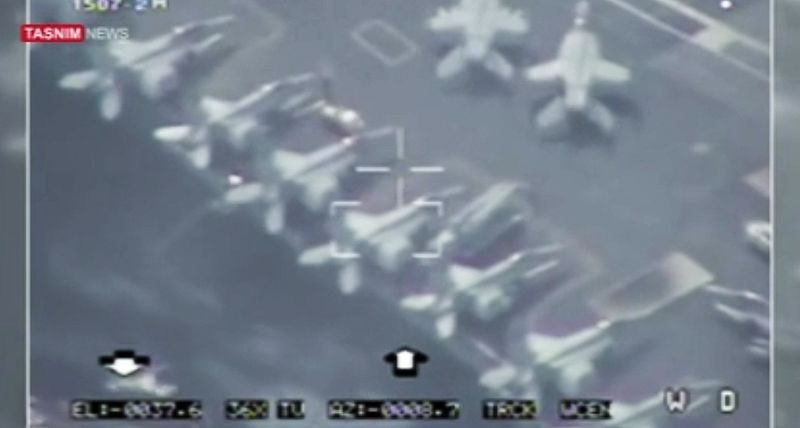 The story of how Iran flew a surveillance drone over a U.S. warship in the Persian Gulf has been hot defense news today. But how big of a deal is this, really? Not much of one, and I’ll explain why.

The public tends to have a somewhat distorted view of how American naval power operates in the Persian Gulf. There’s no invisible and seemingly impenetrable defensive dome reaching out for many miles around major assets like aircraft carriers. The Persian Gulf is a tight operational space, and tolerance is more the norm than firing at anything that gets close. Iran proved this once again by flying a drone right over the USS Harry S. Truman.

The flyby happened on January 16th, the same day two U.S. Navy riverine boat crews were detained in Iranian waters. See the video that was supposedly shot from the drone here.

This is not the first time such a incident has occurred. In 2013 and again in 2015, and probably more times we don’t know about, small Iranian unmanned aircraft flew over American aircraft carriers. The videos were likely shot while the ships were transiting the volatile and restrictive Strait of Hormuz or operating near Iranian islands in Persian Gulf.

Here is a past video of an Iranian drone flying over American carriers in the Gulf:

There’s no real intelligence value that can be derived from these drone videos. You can see similar, and actually much more detailed video and stills of these carriers in action splashed all over social media. Although these small drones flying over U.S. carriers may draw the headlines, Iran has sent many actual maritime patrol aircraft, capable of carrying anti-ship weapons, buzzing over carriers in the past (click here to see just how close they get to our carriers). These operations have even resulted in some spectacular photo ops, like this one showing an F/A-18 flying off the wing of a Iranian patrol aircraft, with a super carrier below.

Commander. Kevin Stephens, spokesman for the U.S. Navy Fifth Fleet, made the following statement to CNN regarding the Iranian drone’s recent fly-over:

“Because the UAV was unarmed and posed no risk to the carrier’s flight operations (since it wasn’t flying at the time), we determined that … the Iranian UAV’s actions posed no danger to the ship. It was however, abnormal and unprofessional.”

In addition to the overflight, the Iranians claim that a Qadir Class submarine was able to get close enough to the Harry S. Truman to take this video of it. It looks like it was taken from a nearby ship and that it was possibly doctored to look technologically exciting. Even if it were a submarine, what could the carrier do? Either sink it and maybe start a war, or let it do its thing and move on.

Iran’s Fars News Agency reported that the supposed submarine was deployed close to the US aircraft carrier “with a mission to gather intelligence and capture video of the U.S. vessel’s moves.”

Really, all this is nothing new. Does a small drone really pose some threat to an aircraft carrier? Well, yes. Even a small explosive impacting a jets on the carrier’s deck could set off nasty sequence of events.

But the chances of that being the drone operators’ intentions, and dealing with an international incident by opening fire on it, have to be weighed against each-other. clearly the scale has tipped historically in the “let it be unless it fires on us” direction.

In some ways this could desensitize our forces to Iranian actions, making a real strike on American ships, or even the closing of the Strait of Hormuz, more of a surprise if such actions were ever ordered. Yet at the same time, setting a precedent of firing on anything that could possibly be a threat in such limited and congested waters would likely make U.S. Navy operations less safe. It would also put the region into a perpetual state of widespread war.

There is no doubt that the Iranian military has an obsessive hate for U.S. Navy aircraft carriers that have had a constant presence in the region for decades. They have trained to attack one in elaborate ways. But nothing like this has ever really come to pass, and until it does the U.S. Navy’s tactics will likely remain ones of tolerance and measured response than flat out paranoia.