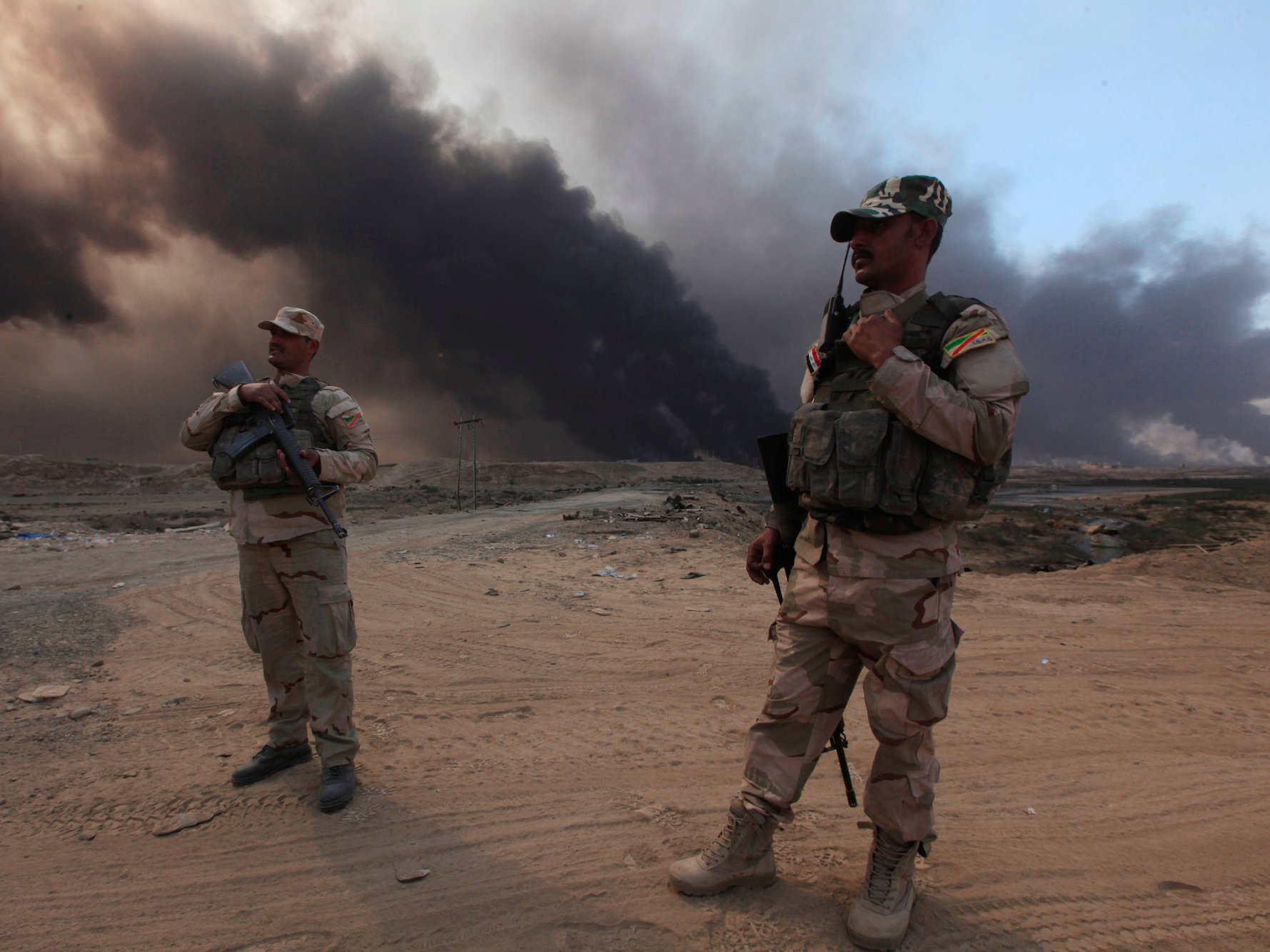 Iraqi army members stand with thier weapons in Qayyarah, during an operation to attack Islamic State militants in Mosul, Iraq.Reuters/Alaa Al-Marjani

The ECB meets. The European Central Bank is expected to keep policy on hold at Thursday’s meeting when its latest decision crosses the wires at 7:45 a.m. ET. The euro is little changed at 1.0973 against the dollar.

The Mexican peso suggests the third presidential debate was a tie. Traders have been using the Mexican peso as a proxy for who is going to win the election. After seeing a brief spike following the debate, possibly suggesting Clinton won, the peso has fallen back to the unchanged line near 18.5200 per dollar, suggesting a tie.

Australia’s jobs was disappointing. Australia’s economy lost 9,800 jobs in September, which was far worse than the addition of the 15,200 jobs that economists had forecast; however, the big miss might be the result of some volatility in the census. The Australian dollar is down 0.7% at .7667 against the dollar.

Wells Fargo is being investigated for identity theft. California prosectuors are looking into whether or not Wells Fargo’s creation of millions of fradulent accounts constitutes identity theft, Bloombeg reports.

Tesla says cars will have self-driving hardware. The electric car maker announced on Wednesday that all new cars, including the Model 3, will have the ability to be fully autonomous. “The foundation has been laid for fully autonomous, it’s twice as safe as a human, maybe better,” CEO Elon Musk said during a media call Wednesday evening.

EBay gave weak guidance. The online retailer beat on both the top and bottom lines, but said adjusted earnings per share from continuing operations would be in a range of $0.52 to $0.54 for the holiday season. That’s at the low end of the $0.54 that Wall Street was expecting.

American Express posted its lowest quarterly revenue in over 5 years. The credit card giant earned $1.20 per share on revenue of $7.77 billion, which was its lowest in over five years as a result of losing its Costco contract.

Earnings reporting is heavy. American Airlines, Dunkin’ Brands, Verizon Communications, and Walgreens Boot Alliance are among the names reporting ahead of the opening bell. AthenaHealth, Microsoft, and Schlumberger highlight the earnings reports coming out after markets close.

US economic data flows. Initial jobless claims and the Philly Fed will be released at 8:30 a.m. ET before existing home sales crosses the wires at 10 a.m. ET. The US 10-year yield is up 1 basis point at 1.75%.