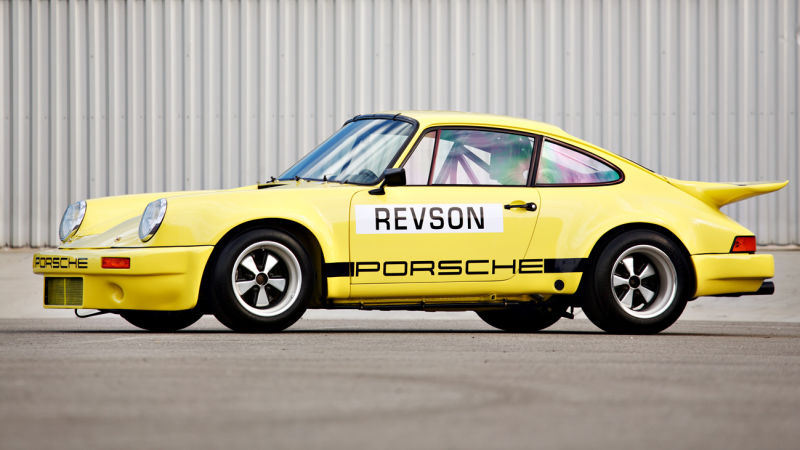 By now the world knows about the three rare Porsches Jerry Seinfeld put up for sale, but the reality is that tomorrow, you can actually buy pretty much the entire Jerry Seinfeld Collection at Gooding & Company’s East Coast auction. Here are all his special cars up for grabs.

With all that NBC and Sony money coming in, we wonder: Does Jerry Seinfeld need space the for… Read more Read more

But before we have a look at what will buy Jerry at least three very pleasant private islands somewhere sunny, let’s have a peek at some other lots, because I know of at least nine more stunning reasons why you should max out your checkbook at Gooding’s Amelia Island Auction.

Need another five? Let’s start with a budget car: a 1976 Triumph TR6. These roadsters are just badass. If you don’t fancy Jerry’s Beetle, how about a perfect early one from 1951? Buy it before Torchinsky does. Here’s a tasty Series III Lamborghini Espada for the family men out there, a 1966 Abarth 1300 OT Periscopio if you wanna go loco, and last but not least, an Iso Grifo if you think an Italian muscle car is the ticket.

Moving on to Seinfeld’s soon-to-be-gone collection…

One of just two Carrera GT prototypes, purchased directly from Porsche by Seinfeld in 2007. It was driven by Walter Röhrl back in the day for Porsche’s photo shoots, but you can’t drive it today. Not only that, but any future sale is subject to a right of first refusal in favor of Porsche.

An all-original short-wheelbase with less than 19,000 miles, owned by collectors for over 30 years. In Jerry’s words: “This is as pure and perfect a ’60s 911 as there is in the world. The colors are so wonderful. No restored car has this delicious smell. Car heaven as a pure early 911.”

Built for Seinfeld with Porsche Exclusive Customization Packages DZM and DZP and finished in Pure Blue, this is 009 of the 356 997 Speedsters produced and one of just 100 imported for the US market. Jerry: “Porsche made this car just for me with a lot of cool bare carbon fiber, which I never get tired of”. Estimate: $300,000 – $400,000.

That 4.0 flat six designed by Hans Mezger, that historic livery, that wing. This is it.

One of five, purchased new by Jerry Seinfeld from Brumos Porsche. Two hours of track use in all at a private track day at Willows Spring Raceway. Estimate: $300,000 – $500,000.

The final evolution of the air-cooled Euro-spec M64/75 engine, one of just 45 built.

One of approximately 56 GS/GT Carrera Speedsters built with alloy panels, believed to be only one finished in Auratium Green. Equipped with the rare Type 692/0 Four-Cam Engine. Acquired by Jerry Seinfeld in late 2012.

One of only 76 examples of the Porsche Exclusive-built 964 Turbo 3.6 S Flachbau. Equipped with the high-performance X88 engine.

One of 39 US-spec cars built, and the only one finished in Polar Silver Metallic.

One of only six, Sunoco livery, perfection. Jerry: “What’s very surprising about this car is how comfortable and easy to drive the most powerful race car the world will ever see is. I never drove it as fast as it can go. The car’s crazy. I’m not.”

One of only 71 Jagdwagens built and as few as 15 extant.

A real beauty made just before the 911 was getting ready.

Jerry: “An amazing car with an amazing sound. These are so rare, harder to find than an Abarth. But just as thrilling. Four-cams at high rpm are reasons to live.”

One of 15 RSRs built for Roger Penske’s IROC Series. Jerry:

A four-cylinder twin-cam, an aluminum body, no crash protection.

Porsche going back to basics in the fifties.

A white Speedster from the ‘80s with less than 3,800 miles on the clock. Jerry: “One of my favorite 911s and another of the greatest summer cars of all time. I like the Star Wars Storm Trooper look with a snazzy low-cut top. I’ve had five different ’89 Speedsters over the years in different colors. Loved every one. This one is cool because it doesn’t have A/C. Lighter.” It’s almost cheap too, estimated to fetch between $250,000 – $325,000.

“My favorite detail is the Porsche badge on the nose, which has been left in it’s original condition. Note the fit of the rear lid and the shift pattern sticker on the windshield. So perfect. ‘57 was the only year for Aquamarine Blue Metallic, and the beehive tail lights are the best.” Estimate: $500,000 – $600,000.

It’s lighter than the one above.

“You can’t drive a sonnet by Shakespeare or a symphony by Beethoven. But this would be the automotive equivalent.”

He had to have a Beetle:

One of the finest unrestored split-screens. Jerry:

“When my kids were little we would drive around in this bus every Sunday to get bagels and lox. The little kitchen drives them wild. We got busted by the cops with it for putting up an illegal lemonade stand this past summer in the Hamptons.” Estimate: $80,000 – $100,000.

Sorry Jerry, you still can’t buy a Ferrari 250 GTO, but grabbing two McLaren F1s wouldn’t be a bad idea in case you already have an island.