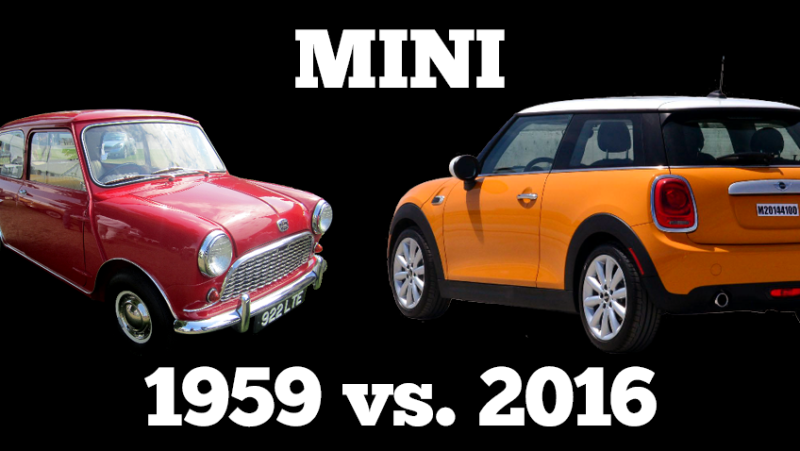 The original Mini, introduced in 1959, is an automotive icon on the level of the Volkswagen Beetle. When it finally ceased production in October 2000, its successor had very large shoes to fill.

To their credit, when BMW debuted the new Mini, it was a hit. But there are always discontents and ever since BMW gave Mini new life, internet commenters have been complaining that each new model introduced is unworthy of the Mini name due to size.

In 2013, MINI introduced its third-generation Hardtop (a.k.a. Hatch outside of the US). Predictably, the new car grew by a considerable margin, but what took many by surprise was the introduction of a 5-door Hardtop. Once again, internet commenters everywhere lost their minds.

Here we have the first Mini (originally sold as the Austin Se7en and Morris Mini-Minor) and the latest, greatest MINI Cooper Hardtop 2 Door (yes, that is what BMW calls it). The intent is to compare the original to the closest current equivalent, hence the Hardtop 2 Door. The 4 Door is about 8 in longer and 0.5 in taller on a 3 in longer wheelbase.

It was obvious going in that there would be a big difference between the two cars, but the contrast is starker than expected. Compared to the original, the current car is nearly 3 ft longer with 18 in of that between the wheels and is more than 1 ft wider. That works out to growth of about 24% in every direction but up.

Obviously the old Mini is slow as all get–out, but the factory claim for 0-60 mph was over 26 seconds. Twenty-six seconds! By contrast, the new Mini, while not exactly fast, has enough get up and go to avoid being trampled by the herds of crossovers and SUVs.

The base price of the original Mini is about equivalent to a new Nissan Versa while the new Mini has nearly doubled that figure. Credit BMW’s insistence on bringing the Mini back as a fashion accessory instead of an economy car.

Interestingly, that shift from economy car to fashion accessory happened before the introduction of the new Mini. By the late 80s or early 90s, the original had ceased to be competitive as an economy car and became a low volume fashion piece. So the credit for that does not lie with BMW, however they do get credit for understanding that better than Rover Group, who wanted to bring it back as an economy car.

Thoughts? Questions? Corrections? Have a specific comparison you would like to see?

Justin Hoffman needs to come up with a reusable bio that he likes, but hasn’t managed to yet. In the mean time, you can always follow him on Twitter.