This year has taken a toll on many fintechs globally, with alt lenders in particular struggling to operate as borrowers became riskier and retail investors became wary of lending money to consumers or businesses via loan marketplaces. Alt lenders’ struggles triggered a wave of consolidation in the industry. 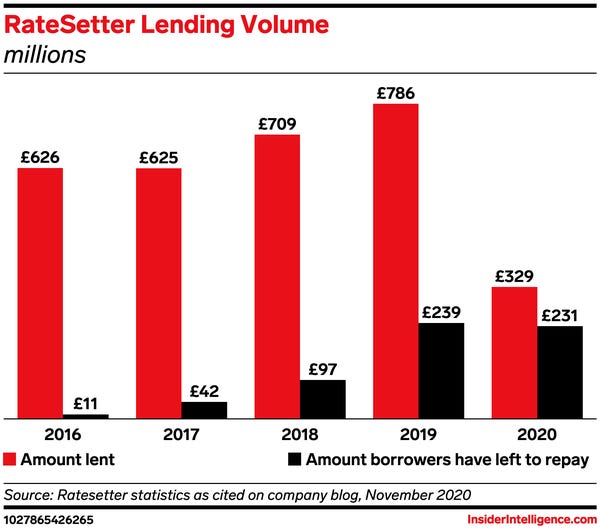 Metro Bank’s acquisition of RateSetter was one of the biggest alt lender deals fo 2020.
Insider Intelligence

Three acquisitions were especially notable in 2020—below, we take a look into each one of them:

US-based OnDeck was acquired for just $90 million, a much lower value than when it went public in 2014. The alt lender was purchased by Enova in July after a turbulent start to the year: OnDeck reported troubling Q1 2020 results in May, with a net loss of $59 million. It attributed the losses to a surge in pandemic-related loan delinquencies on its platform, which more than tripled by the end of April. Additionally, OnDeck let go of an unspecified number of employees. This likely enabled Enova to acquire the alt lender at a steep discount: OnDeck was valued at $1.4 billion at the time of its IPO in 2014.

UK-based peer-to-peer (P2P) lender RateSetter was purchased by Metro Bank to boost the bank’s loan distribution. Rumors about the acquisition first emerged in June, and the deal was closed in September. RateSetter had struggled amid the pandemic, including a steep drop in volume lent out on its platform—from £786 million ($1.05 billion) in 2019 to £329 million ($419.9 million) as of November—hurting revenues. Meanwhile, Metro Bank had been interested in the P2P sector for a while: It teamed up with Zopa in 2015 to fund the latter’s loans, for example. By strengthening its unsecured lending, Metro Bank can potentially generate greater interest income because it has higher interest rates than other types of lending.

US-based Kabbage was scooped up by American Express, likely to enhance the latter’s lending solutions. The deal was first publicly disclosed in August, and while the sum remains undisclosed, the small business lender could have been worth as much as $850 million. Under the deal, Kabbage’s full product suite will be integrated on one online platform to help Amex’s small- and medium-sized business (SMB) customers better manage their cash flow and access working capital. Amex already offered a range of business tools, including tracking business expenses through its app, but can now meet even more SMB needs through the acquisition: Kabbage Insights, for example, can analyze Amex’s millions of SMB customers’ transactional data to help them better manage cash flow.