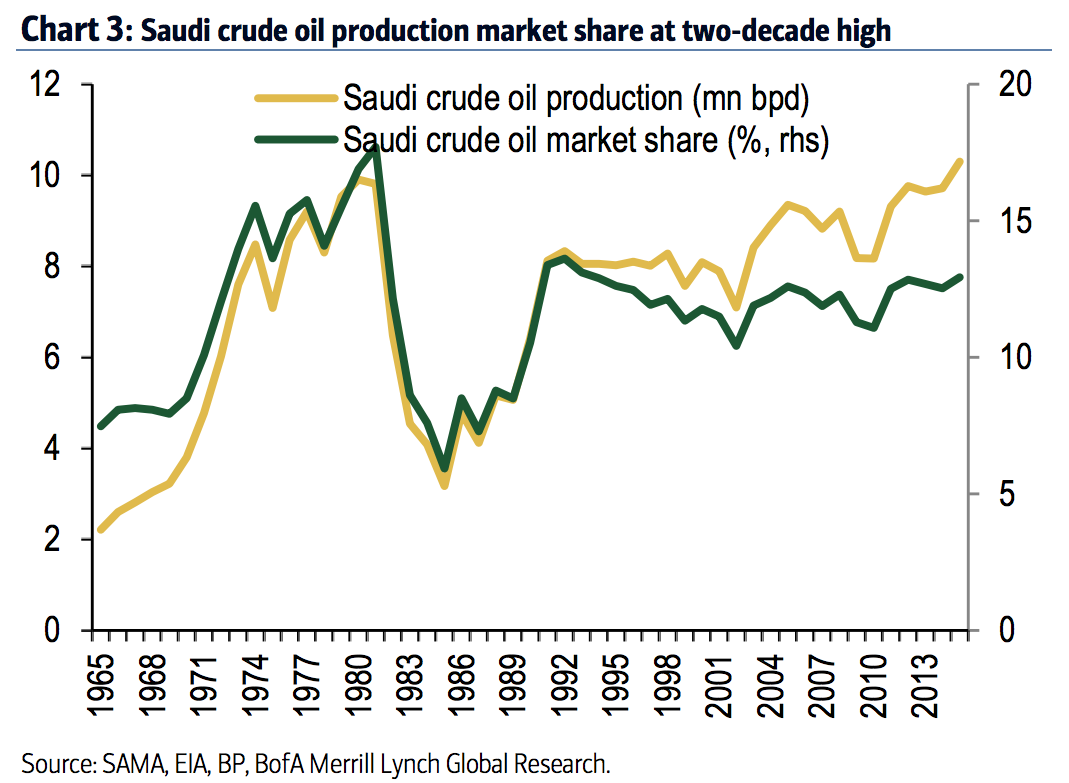 BAMLSaudi Arabia’s oil production has ticked up over last decade as it works to defend its market share.

There have been a few whispers of a coordinated cut between OPEC and non-OPEC over the last few weeks.

And on Friday crude oil prices were spiking more than 10% on renewed hopes these actions could bring balance to the oversupplied market.

Notably, Saliba singled out the first detail in particular.

“Until Iran oil export ramp-up is complete, we think OPEC is unlikely to be able to agree on a common policy,” he argues. “As the Iranian oil exports increase could be well underway to completion by end-1H16, the next Ordinary OPEC meeting in June is important to monitor.” Perhaps this is not entirely surprising. Several analysts have previously pointed to the tension between Saudi Arabia and Iran as something that could affect what happens in the oil market.

Back in January, Oppenheimer’s James Schumm argued that “though low oil prices hurt Saudi Arabia, they negatively impact Iran in a much greater way and it crimps Iran’s ability to fund sectarian uprisings in Saudi Arabia’s backyard.” Hence, it behooves the Saudis to weather lower prices for longer.

Moreover, Iran’s imminent return to the market inspired a major stress point back at the December OPEC meeting between the Saudis and Iran as the two parties adopted conflicting stances on cutting output, as RBC Capital Markets’ Helima Croft observed.

Interestingly, Saliba also argues that what’s happening today could be similar to what happened back in 1997/1998:

“These developments would bear some resemblance to the situation in 1997/1998, in our view, as Saudi Arabia had led a 10% OPEC supply quota increase in December 1997 in the face of declining demand from Asia. By March 1998, Saudi Arabia had cobbled together a joint cut with non-OPEC producers (primarily Mexico and Venezuela), followed by an OPEC cut in June 1998 and a further OPEC cut in March 1999.”

Although, the “one key difference with that time however is that Saudi Arabia’s balance sheet is much stronger now to sit out the shock as the ensuing oil price rebound in 1999 could have likely saved off Riyadh from a devaluation at the time,” writes Saliba.

“Recall that Fx reserves were low (9.7% of GDP), government debt was high (102% of GDP) and there was a ‘speculative attack’ on SAR with increased domestic dollarization in 1998.”

In any case, the big point here is that even though a coordinated production cut sounds appealing economically, there are all sorts of other factors that could derail it.

NOW WATCH: Watch Trump go head-to-head with a reporter and attack Megyn Kelly for being a ‘lightweight reporter’