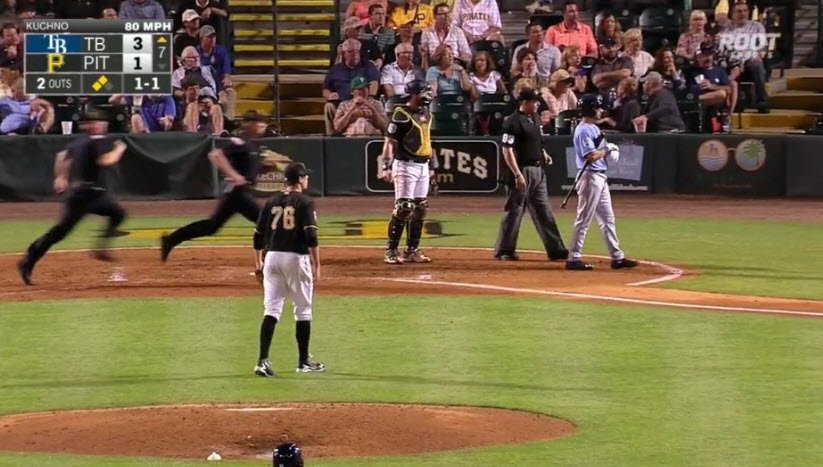 In a bizarre scene, a fan ran onto the field during a spring training game between the Tampa Bay Rays and Pittsburgh Pirates and appeared to be protesting the Rays’ recent trip to Cuba.

The incident came in the top of the seventh inning. The fan ran onto the field, approached the Rays dugout, and reportedly threw bottles of beverages at the Rays players while yelling in Spanish.

While the fan was not shown on television here is what the scene looked like.

According to Marc Topkin of the Tampa Bay Times, the fan was yelling in Spanish about the team going to Cuba, and was arrested. The fan was detained by the Rays’ third-base coach, who described the protester as “60 plus and drunk,” presumably referring to his age.

Topkin also spoke with Rays players about the scene:

#Rays Odorizzi said it was more “very strange” than scary: “It was a Cuba thing.”

#Rays Motter said fan threw aluminum beer bottle and Pepsi bottle, one exploded on back of dugout wall: “We had to duck and weave a bit.”

Earlier this week, the Rays travelled to Cuba, becoming the first Major League Baseball team since 1999 to play on the island.

Topkin later reported that the protester was arrested and charged with trespassing and starting an affray.