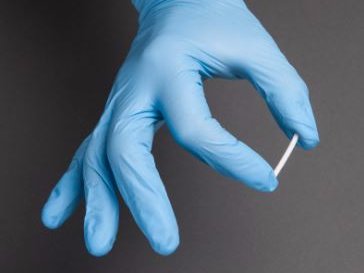 An implant that delivers a medication continuously for six months could help address some of the toughest challenges with managing drug addiction.

The implants, an inch long and the width of a matchstick, carry a drug called buprenorphine, which scientists hope can help wean people off addiction.

Buprenorphinean is an opioid itself that appears to work by activating the receptors in the brain that respond to opiates like prescription pain medications or heroin. It’s then designed to create a sealing effect over the receptors so the person who’s addicted doesn’t crave getting high to the same extreme, which helps cut down the risk of them relapsing.

And the implant just got an important recommendation from an FDA advisory committee. On Tuesday, Braeburn Pharmaceuticals, a small drug company based in Princeton, New Jersey said its drug, called Probuphine, should be approved to help people suffering from opioid addiction get and stay clean.

Probuphine has been up for FDA review before, in 2013, when it was rejected because of FDA concerns about dosing and how effective it is at actually keeping people from abusing opioids again.

According to the Centers for Disease Control and Prevention, only about half of all people who take any kind of medication do so in the way that’s actually prescribed. About 20-30% of people never fill their prescriptions in the first place, and others simply forget to take it or choose not to.

That’s a big problem not only when it comes to chronic diseases which need constant and consistent management, but in particular with conditions that are pain-related and require treatment with powerful, potentially addictive painkillers.

Over time, the body develops a tolerance for opioids, which means people may need to take more to get the same effect. Stop taking the medication regularly, and that tolerance goes down. The problem, then, is when someone who’s addicted to a drug returns to it after a long period of being clean — they can overdose fairly easily. This is what contributes to higher rates of overdose in many addicts, according to the National Institute for Drug Abuse.

This is one of the reasons behind Braeburn’s implant. “If you make a mistake, because opioid dependence is so unforgiving as a disease, one mistake could kill you,” Braeburn CEO Behshad Sheldon told Business Insider.

Right now, there are three main ways to help treat people fighting drug addiction: naltrexone, buprenorphine (which is approved already in a pill and film that’s placed under the tongue), and methadone. But each drug poses its own set of problems.

With naltrexone, the idea is to take the pill every day starting a week after the person stops taking a drug. Then the naltrexone is designed to help block those receptors, which ideally curbs cravings. Plus, if people do take the drug while on the medication, the naltrexone can help staunch some of its high-inducing, pleasurable effects. But that can sometimes go beyond and make normal, pleasurable experiences feel dull.

Buprenorphine has its challenges too. The drug is commonly misused by people who are not opioid dependent to get high, for example. And for its part, methadone is only administered in strictly regulated clinical settings, which can pose access problems to people who want to recover or are in the process of recovering but who can’t always get to the clinic when it’s open.

If Probuphine gets approval this time around, the drug would become the first approval for Braeburn. Beyond that, the company is looking into injectable versions of buprenorphine taken weekly or monthly that could bridge the massive gap between taking a pill once a day and a six-month-long treatment plan. That way, the doctor can better monitor the recovery in its early stages, a concern heard at the advisory committee meeting for the implant.

“I would not want to create the expectation that you can just implant this and say ‘bye-bye,’ ” said Dr. Melinda Campopiano, a medical officer at the Substance Abuse and Mental Health Services Administration, according to The New York Times.

But so far, Sheldon said the news of Tuesday’s panel has generated a lot of interest.

“We’ve had doctors and patients flooding our office with calls and we’re a small company so our office manager is asking ‘how do we triage these calls?'” she said.

NOW WATCH: Flakka — the drug they call ‘$5 insanity’ — is overwhelming police and hospitals in Florida