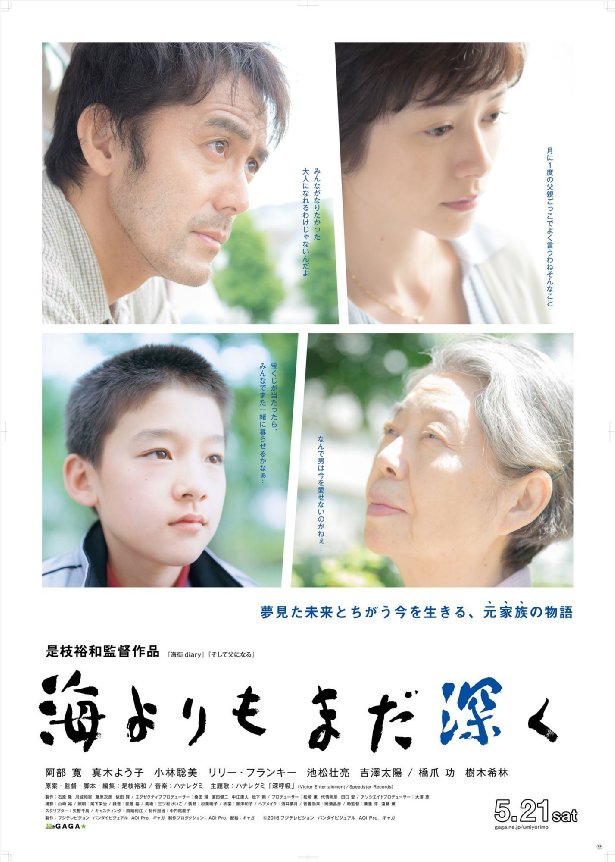 After the Storm takes place in the modern day Japan, filmed in exact “danchi” (low-rent housing) that Koreeda himself grew up in. All-Japanese good lookin’ Abe Hiroshi (Still Walking) reunites with the director as Ryota, a disheveled former writer 15 years removed from a literary reward that put him on the map. In that time, he has produced no follow up to his success and works for a private investigator for “research” into his next novel, and also as a way to pay his bills.

During those same 15 years, Ryota also bore a son with a beautiful wife Kyoko (Yoko Maki) and subsequently ruined his marriage through a gambling addiction and lack of direction in his life. When not gambling away his child-support, he hangs out with his mother, played by another Koreeda veteran, Kiki Kirin, who seems have found an eye for a local teacher now that her husband has passed away.

Ryota desperately tries to keep his pitiful existence going, pawning possibly valuable items from his mother’s house and bribing his PI targets to pay him hush money, but deep down inside, his deepest secret is to remain a permanent fixture of his son’s and possibly his wife’s lives. He is granted a rare opportunity for forgiveness when he finds himself trapped in a tiny Japanese apartment with all three people during a destructive typhoon.

All the perfect setups for a generic family melodrama, but remember, we are in the hands of Hirokazu Koreeda, a man who wouldn’t dare steer you into grand moments of redemption or black and white happy endings. Instead, we are treated into a look at Ryota’s soul and given reasons for wanting to sympathize with this otherwise failure of a writer, father, and adult.

A slow paced first half gives a look into his daily routine of spying on his wife and son during her dates and being loaned money by his boss and older sister, who very well know they won’t be given the money back. Ryota is by no means a perfect human being nor one of these destructive angels who just needs to find the right path before all becomes well. He starts out the film as a man who we shouldn’t care for in the least, but After the Storm provides enough reasons to at least stick with him until his moment of realization comes to him. Through his conversations with colleagues and family, not to mention a few comic “black comedy” moments and touching speeches here and there, Ryota reveals himself not to be a bad person at all, just lost like a good many people find themselves these days in an age where our dreams seem all the more out of reach.

Abe Hiroshi comes off as a crumbling husk of his normal self. At 6’2” and sporting a perfectly square jaw, he’s a giant of an actor in Japan with a babyface to match the best the world has to offer, but you wouldn’t know this in After the Storm. His constantly slouched back, wooden and exhausted face, and disheveled hair help him disappear into a role that is far removed from the typical professional model jobs and Italian statues he is known for in Japan. Naturally, Kiki Kirin is also fabulous, once again morphing into an aging Japanese matriarch just as naturally as she did in Still Walking. Her role seems a little repetitive after essentially playing this same character for the third straight time in a Koreeda film, but her closing moments of the film remind us exactly why Koreeda keeps returning to her.

And bless Koreeda for getting an excellent performance out of Taiyo Yoshizawa, the boy who plays Ryota’s son Shingo. The director has earned a reputation for getting children to give it their all in films, and once again, the son is flawless on screen.

Yoko Maki is great as well, and it is these performances which carry the second half of the film, the slow build up making the wait for the storm all the worthwhile. Ryota tries to win his wife back without her being able to run away, but much like the poor gambler that he has become, he doesn’t know when it’s time to hold a chip back or two. Long takes cramped in a cheap Japanese apartment must have been a huge burden on the actors, but they obviously pour their all into totally natural performances.

Ryota confronts his failures as a father and a writer. His ex-wife Kyoko struggles with this temporary forced opportunity to be a family again, confusing it as being natural and wondering if it would be best for her son just to return to a man she has already left. The two are left in a room together for a solid five minutes and just pour over their failed marriage, hangover issues, and future of their son in a fabulous single take where they barely move a muscle. Ryota makes the excuses of a shleb, Kyoko tries her hardest to remain stern on the outside trying to seem like the practical one despite her insides obviously being torn apart.

An even more wrenching scene to watch comes from a gentle confrontation between grandmother and former daughter-in-law, both of whom realize that their outlooks on the future regarding the grandson can’t possibly coexist, and one of them softly surrendering to the other in the most subtle, “Japanese” way imaginable.

In the end, Koreeda knows that a simple night stuck together can’t fix all the tussles and complex inner-workings of a family, and luckily, his script and characters realize this as well. We’re left not with a grand family reunion or the happy “return to normal” situation that a melodrama from a lesser director would deliver, but rather, the most natural and honest ending capable of a film this touching. Open-ended, peaceful, and slightly sad, but definitely a far more “feel-good” ending than the masters of the 60s would have left us with.

The world is not totally out to get us, and Koreeda at least acknowledges that both films and life can end on a happy note, even for those who took a long time to earn it.

After the Storm could be one of Koreeda’s strongest films to date, exploring the insecurities that lie within all of us: our job, our families, our expectations and failures, and our future, learning to accept those parts that came up short and move on with those that can still be salvaged. His ability to tell it with such a human approach and brilliant performances from his actors are what sets him apart from the rest of his peers.

I can’t wait until it’s subtitled, so I don’t have to lean on my horrendous Japanese to get me through the more detailed parts of it.

If you’re new to Koreeda Hirokazu films, then by all means check out his most widely available masterpiece Still Walking through the Criterion Collection, and then work your way through the world of his other brilliant works one by one. While I don’t have the highest opinion of Japanese live-action cinema these days, he is a man who proves that his home country still has layers upon layers of potential to tell powerful, heart-filled stories for the rest of the world to be captivated by, and I can only pray that a generation of film-goers and future filmmakers are able to follow in his footsteps.