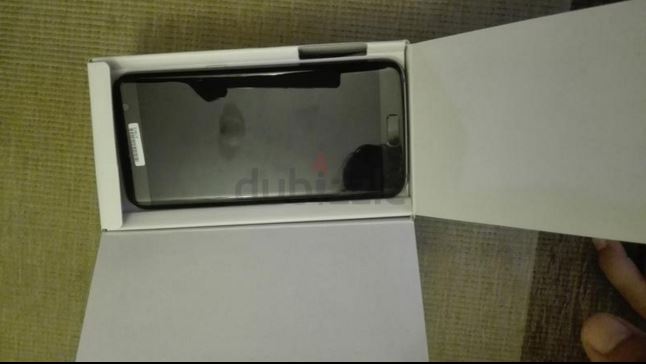 Someone out there might be in a lot of hot water. An alleged Galaxy S7 Edge recently appeared on a Dubai classifieds site named Dubizzle. While listed for sale, it’s unclear if it was actually ever meant to suit a buyer, or if it was a clever way of leaking Samsung’s new flagship smartphone.

The listing provided three images of the phone sitting in a plain white box, which suggests it might have been some sort of sample, either later bound for the press or for carrier testing. The branded boxes usually come later, when the phone is ready to ship to consumers. Or, it’s also possible that this is a fake, some sort of copycat mockup.

Still, the images are convincing enough, showing what appears to align with leaked press images and renders of the smartphone. We can see more rounded corners, the similar design to the Galaxy S6 and Galaxy S6 Edge and what appears to be a slightly modified back panel. The components that came in this particular box included a USB C cable, what appears to be a microUSB adapter, and some sort of additional case, perhaps for headphones.

The phone was originally listed at for $1,144 and, as PhoneArena notes, with some convincing IMEI stickers. Seems like Samsung might have been able to trace down who posted it since the listing is no longer live. We’ll know much more about this phone and the Galaxy S7 come Sunday during Samsung’s Mobile World Congress press conference.