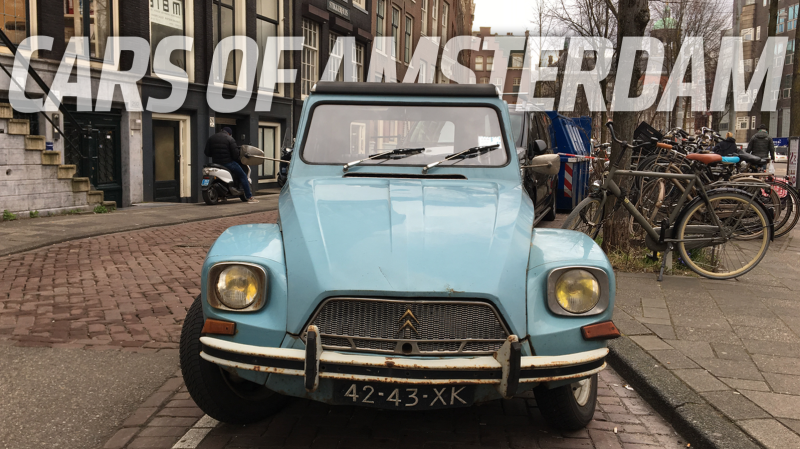 I was just in Amsterdam for a very, very brief trip to see the new Lynk & Co 02, and while I was there I managed to squeeze in a bit of on-the-streets car hunting. And, sure, it’s hard to see the cars through the piles and piles of bikes everywhere, pedaled around by healthy Dutchfolk, but they’re there, and, even better, they’re pretty good. Let’s have a look!

Oh, but first, I want some help with a paradox I noticed at the airport. Look at this picture here:

See that? It’s a free-standing door frame in the middle of a hallway, with a pair of doors on it. You can walk around both sides of it with ease. It’s just like a narrow traffic island, kind of.

On one of the doors is a sign that reads EMERGENCY EXIT KEEP CLEAR. This all brings up one important question: what the fuck is going on here?

What is that an emergency exit to? The other side of the hallway? Why is this door there at all? it appears to do literally nothing. Opening the door would give you access to the same area of space that you could get by walking two feet around the doorframe.

What the hell is this? Do the Dutch have quantum wormhole technology? Is this a stargate? I’m so confused. Please, if there’s anyone from the Netherlands reading, explain what the hell I’m looking at here.

Okay. Let’s get to the cars.

First, right in the airport parking lot I saw something a bit unusual: a new Aston Martin DB11. It’s not exactly my thing: new, beautiful, powerful, and fast as opposed to my preferred old, homely, anemic, and slow, but it’s still a pretty cool car to spot.

This is more like it—a Renault 5! I always loved the clean, geometric design of the later Renault 5s, and this one was in quite good shape, buzzing along the highway with ease.

We only got these in the U.S. as the LeCar, briefly, but I think the design really came into its own with these updated versions, which have a clean, efficient feel that’s hard to beat.

Those bumpers could use some Armor All’ing, though.

We don’t get SsangYongs in America, mostly because most Americans would have a cerebral hemorrhage trying to spell the name. This one looks to be a first-gen Rexton, which was based on the Mercedes-Benz M-Class.

Many SsangYongs are deeply, powerfully ugly, but I think this one is actually a pretty handsome car, for what it is.

I was a bit surprised—and pleased—to see how common these quadracycle almost-car things were in Amsterdam. This one is an Estrima Biro, an all-electric, fully-enclosed microcar that can get up to about 34 MPH.

It looks pretty rudimentary, but it doesn’t seem that flimsy, really, and I saw these things all over the place. I think the big advantage of them is that you seemingly can park them just about anywhere—sidewalks, between cars, alleyways, and probably on stairs or in parks, I bet.

Amsterdam has some streetside electric car charging stations, something that’s pretty desperately needed in America if anyone who lives in a major city and parks on the street wants to drive an EV. EVs could make a lot of sense in a big city if more of these actually existed. It’s nice to see it’s possible, at least.

Amsterdam really is dominated by bicycles, and it’s interesting to see how they evolve and develop in this environment where they can breed and adapt to their surroundings. That’s how you end up with things like this, a wheelbarrow-bike hybrid that fills the role of a small truck.

This is another interesting quadracycle/invalid car, the Canta GLX. This one is native to the Netherlands, and they’re all over the city, also parked pretty much wherever the hell they want.

The design is sort of a comical little wedge, and these do have a certain dorky charm about them. In fact, a whole ballet was written to use them, which I think deserves its own story that I’ll write up soon, I promise.

There are versions that allow a wheelchair to be rolled right into them, which is pretty great, and they use a small (around 200cc, I think) gasoline engine. I really want to try one out.

As I mentioned, bikes are the dominant vehicular species here, and there’s some impressive specimens. This one was so basic and chunky-looking, but still sort of clean and sleek. It looked expensive, and I bet it was. And it wasn’t even locked!

Hey, look, a little Mazda wagon I’m not familiar with! It’s a Mazda Demio. This one is a first-gen one, and was also known as the Mazda 121, and rebadged as the Ford Festiva Mini Wagon—we never got these in the U.S.

It’s got appealing, friendly proportions, small but with a tall greenhouse. It looks like a really useable little city car.

Oh boy, I was so excited to find this guy. It’s a Citroën Dyane, which was sort of the upmarket, slightly modernized 2CV. It was never as popular as the 2CV, but it was more practical, with a real hatchback, a slightly more substantial body, and, I think, a pretty cool look.

This one appeared to be someone’s daily driver, which I absolutely love to see. It even had the yellow headlight bulbs like French cars had until the 1980s or so, which is a detail I’m absolutely a sucker for. I love this thing.

And that mismatched door is just (*chef kiss*)

There’s a lot of canals in Amsterdam, and to move about on them, people use these sort of water-based cars that “drive” on the road “canals” without “wheels.” I think they’re called “boats” or something exotic like that.

This “boat” even had its own little Volkswagen Polo riding on its back.

I’m not sure who this guy is, but he appears to be the most prepared man in Amsterdam for whenever the shit goes down, whenever and however that will be.

This Land Rover Defender seems to have everything you can stick on it from the tools catalog: ladders, snorkels, lights, racks, cladding, all the toys. I love it.

This is just another shot of one of those Cantas, parked next to a Fiat 500, so you can see just how small these things are.

Also, how come the U.S.-spec 500 hasn’t gotten those fun toroidal taillights like the Euro ones have?

Oh man, look at this! It’s a British Ford Transit, from the mid ‘70s, I believe. I love the bulldog-snout look of these, and I believe these were available with Essex V4 or V6 engines—the V6 is the same engine as in my Reliant Scimitar, and V4s are always unusual and interesting.

This one is even better because it’s a camper-conversion Transit, with a fun-looking fiberglass camper body with an over-cab bed. This thing looks like an absolute blast, and I hope whoever owns it actually takes it out camping. I bet they do.

Another SsangYong, this time a Korando, a car most notable for its fearless use of a Jeep-like seven-slot grille and what are very likely the longest turn indicators ever built by the hand of man.

This was a real treat: a Peugeot 404, in remarkably solid shape. This one looked to be also a daily-use car, not perfect, but very solid and well-maintained. It’s a handsome car, perhaps less quirky than what we normally think of when we imagine French cars, but still having a certain stately charm.

If it looks sort of Italian, that’s because it’s a handsome Pininfarina design. Lovely car.

Here’s another Peugeot, a 306 convertible from the early-to-mid ‘90s, I’d guess. It’s also a handsome little car. Man, I hate that we get no French cars in America.

Again with the French! I feel like I always notice these Citroën Picassos when I’m in Europe. I know many people can’t stand them, but I really like the inflated-balloon look about them. They appear to use their interior space really well, and I suspect that it’s a pleasant car to drive and live with.

Here’s a fun way to end this little car-tour: a 1981 Volkswagen Beetle. This one is actually a special edition Beetle, a Silver Bug edition. The Silver Bug was built to commemorate the Beetle surpassing the 20 million built mark. Which is a big deal.

These were Mexican-built Beetles and were only exported to a few markets, the Netherlands included, and came with the smallest engine you could get in a Beetle at the time, a 1200cc/34 horsepower engine.

VW offered a 1600cc/50 hp engine at the time, too, and I have no idea why they decided to fit the special edition one with the tiniest engine. Nostalgia?

If you can ignore all the bikes, it seems Amsterdam has a pretty rich and varied car-scape. I was impressed!