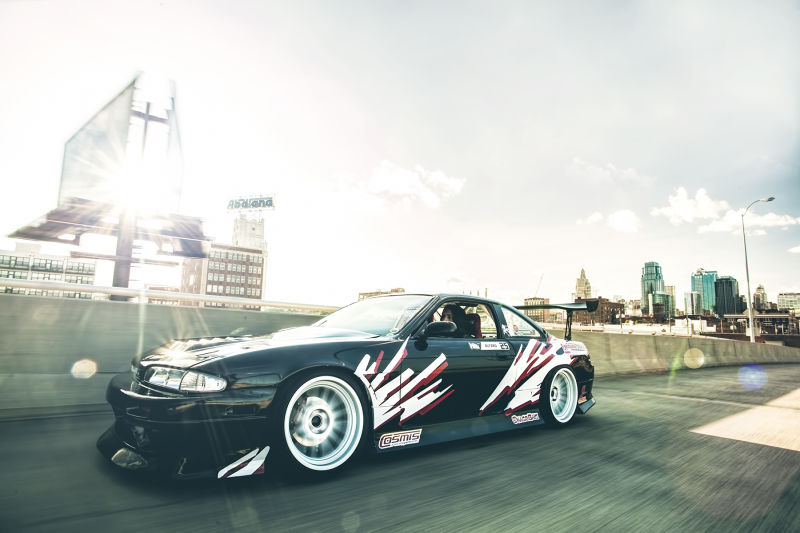 As I often like to complain about, Missouri is basically devoid of racetracks. I know this seems bizarre to our Californian friends, but there is only one quarter-mile drag strip in the entire state, and not a single road course. That is obviously why I’m not a world renowned racecar driver. Of course that’s the reason. It couldn’t be my laughably inadequate mechanical ability, poor skill behind the wheel, or my utter lack of motivation.

Thankfully, there are those who have a wee bit more ambition than I do, like Rolando Alfaro. Like me, Alfaro is from Kansas City, but he’s definitely set his sights beyond our city. He’s a drifter who regularly competes in ProAm events all across America. While he now competes on the track, he got his start on the street. Now, this is a touchy subject to discuss. We all know that the track is a far safer environment to test your limits. No telephone poles, no innocent bystanders, no police. But nobody starts on the track, unless you’re a Formula 1 test tube baby. You start by realizing you enjoy driving quickly on the street, and when that becomes dangerous, you hopefully transition to a safer location.

Alfaro agrees with me on that, and acknowledged that, while street drifting is certainly exciting, and requires commitment, it is a poor substitute for the track. He resolutely believes that one track event will teach more than ten nights of tearing up the parking lot of a Sam’s Club. That seems to be the prevailing attitude of most serious drivers. The street offers high stakes, and unexpected challenges, but you will never truly perfect your skillset when you are worried about consequences. For that, you need prepped surfaces, proper run-offs, and expert tutelage.

But with the nearest track being in another state, lot of people don’t want to run the risk of breaking down out there, and being stranded. Alfaro believes that this is causing the drift scene in Kansas City to be far behind that of other comparable cities. Because of this lack of venues, most in the area view drifting as a fun habit, at most, maybe a hobby. But nobody seems to take it as seriously as Alfaro. He told me that he is the first guy out of KC to build a serious competition car, the first to travel hundreds of hours for full ProAm event series, and the first to get their FD Pro2 license.

Even while the scene itself is in its infancy, Alfaro believes that Kansas City is prime to really take off. The enthusiast base is certainly here. Every month, hundreds of performance cars descend on our local Cars and Coffee meets hosted by From City to Circuit. We’re also chock full of companies like Aeromotive, Procharger, Pure Pursuit Automotive, and Weld Wheels. We have the fans, the companies, and Kansas City itself has been ranked as one of the best cities for start-ups, so there is even money here. So why no slidey slidey?

Simple, we need a figurehead to show us the way. Every new scene needs an ambassador. The Beatles paved the way for British musicians in America, Christopher Nolan paved the way for Zack Snyder, and Alfaro is paving the way for Kansas City drifters. You know a man is serious about cars when his daily driver is an E46 M3 on coilovers. That’s the daily. His last drift car was the most classic choice, a Nissan 240SX.

While Alfaro admits that the 240 had seen every terrible trend and fad, it became a very serious bit of kit. You can check the full build list here, but I’ll try to hit the highlights. LS7, T56, coilovers, hydraulic handbrake. If that alone doesn’t rustle your jimmies, you might be on the wrong site. From the streets of Kansas City, to the skidpad of Heartland Park, to competing at Gateway Motorsports Park, the humble Nissan had seen it all. Sadly, it has since been sold. But he has a new project: another Nissan. This time a 350Z. So if that 240 was the first attempt, the Z will surely be quite a thing to behold.

Confidence is high in the Alfaro camp, and that confidence is a key part of his success. The man has zero fear on the track, whether he’s running the slowest car on the field, or the fastest. But it’s not all the reckless confidence of youth. Does it make me sound old if I chastise the younguns? What if I use the word “younguns” in a sentence? Either way, Alfaro certainly knows his strengths, but he also knows that his inexperience can hurt him if his luck changes. While his driving is top tier, he’s comfortable telling me that he does not have the team to do large scale repairs under time constraints at the track. Luckily, the cars have been exceptionally reliable so far. Build it right, and it won’t break.

The eventual goal is to continue to grow enough to compete in Formula Drift, but the current goal is much simpler: “keep drifting fun”. There’s something honest there. Too often we get bogged down in profit margins, point standings, and reputations. But at the end of the day, if you aren’t having fun, what’s the point? Alfaro got into the scene in the beginning because he watched the Drift Bible DVD back in the day, and thought it looked like fun. That idea of playfulness, mixed with the camaraderie of building ridiculous things with your friends is what continues to drive him to this day.

So keep your eyes open for the cloud of smoke coming from the Midwest, he’s not done yet.

Fails is a freelance photographer who sometimes pretends to be literate. You can follow him on Twitter or see his portfolio here. He is talking in third person because it makes him feel mysterious.