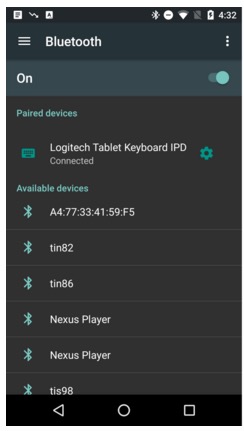 Google won’t reveal Android 7.0 for a few more months, but we’re already getting a first unofficial look at the new operating system. A pair of leaked screenshots shared by Android Police founder Artem Russakovskii reveals one possible change coming with the “N” update.

The images show Android N’s settings menu, specifically the page for Bluetooth controls. Everything looks pretty standard, but in the top right corner we see a hamburger-style menu button. That’s definitely new though hopefully it’s just a small taste of all the changes Google has planned.

The company previously hinted that it’s working on official split-screen support for Android 7.0 though it’s unclear if that will be limited to tablets or available for all devices. More recently, reports surfaced that the N update could kill off the App Drawer in an effort to simplify the software.

As for the official dessert-themed name, that’s still a mystery as well. Last year Google CEO Sundar Pichai hinted that the company might use an online poll to pick a final name for Android 7.0.

We should be getting our first official look at Android 7.0 in May at Google I/O 2016, where the company typically reveals the latest version of Android along with other news from the search giant. The official name typically isn’t announced until later in the year when the update actually rolls out, however.