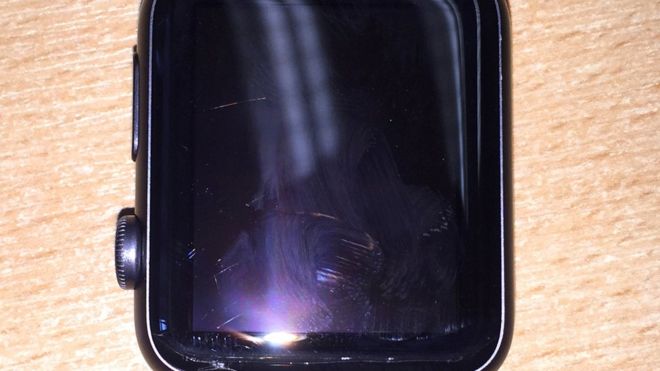 The Apple Watch Sport may not be as tough as originally promised. Apple has apparently been forced to remove the words “impact resistant” from its marketing after losing a lawsuit in the U.K. over a single scratched smartwatch.

The entire ordeal began about six months ago when Gareth Cross, a 32-year old Welshman, bought an Apple Watch Sport. Just 10 days later he noticed a small scratch in the allegedly scratch-resistant display. Cross admits he’s “prone to knocking things about a bit,” but denies doing anything to damage the device.

“I hadn’t even been doing anything strenuous, just sitting around watching TV,” he told BBC. “When I got to work the hairline crack had got bigger and bigger so I called Apple up to get it repaired.”

Apple refused to pay for repairs, since the scratch wasn’t covered by his warranty and he hadn’t paid for AppleCare+ protection. In response, Cross took the company to court. He was eventually awarded a full refund of £339 along with an additional £429.

Cross says he plans to buy a replacement Apple Watch, though he may wait until the second-generation smartwatch is released. “For the 10 days I had it I really liked it,” he said.

Moving forward it looks like Apple will simply remove the phrase “impact resistant” from descriptions of the Sport model, which should protect it from future lawsuits. The cheaper Apple Watch features an Ion-X glass display, which can stand up to most abuse but isn’t as tough as the sapphire glass included in more expensive models.