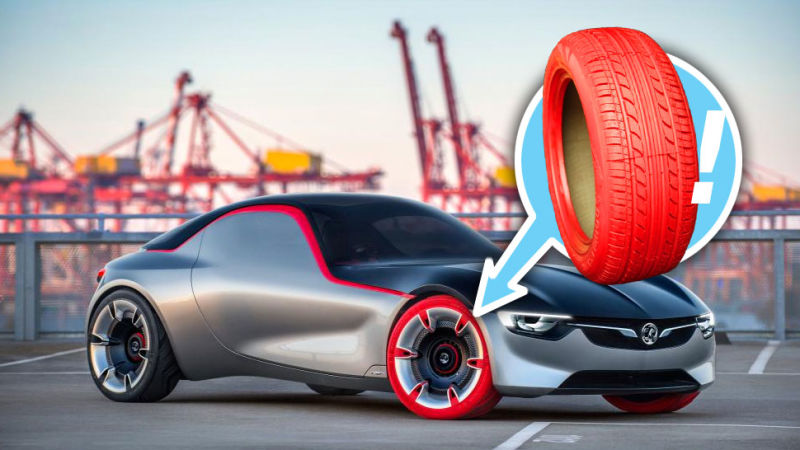 Last night, we wrote about the exciting-looking Opel GT concept. There’s a lot to like about this rebirth of the legendary model, but the biggest thing about the car isn’t the car itself; it’s what it’s wearing: a pair of vivid red tires.

That deletion of the side windows thing is pretty weird, too, but let’s just focus on those tires for now.

I’ve always felt that the tyranny of bottomless-pit-black tires was due to come to an end. I even listed colored tires as No. 8 in a post about what car things should have happened in 2015, so to see it happen this early in 2016 is good enough for me.

The technology to make colored tires has been around for years, and shows up occasionally in motorcycle tires, stripes set into conventional black tires, and in the occasional video where we see colored tires produced, then never again:

This Opel GT concept shows the potential for colored tires integrating with a design motif very well. I like that Opel decided to only use two of them, which actually enhances the novelty and impact of the colored tires. I’m hoping that a fairly mainstream concept like this will get people thinking about colored tires again, and wondering why they’re not readily available.

Tires are traditionally black because adding carbon black to a tire (which, in its natural, organic, sold-at-Whole-Foods-state is white) helps make the rubber much more durable and longer-wearing. Modern methods are making colored tires possible, though I don’t have any data about if they’re less durable than normal black tires, because there’s hardly any out there.

I feel like the resistance to non-black tires is one of those traditional things we never think to question or change, generally, and one that most people would be reluctant to be the first to try, out of some innate fear of standing out too much.

Car colors have been in a decades-long trend of getting more and more neutral and boring, as well, and as someone who is a fan of real, vivid color, it’s a trend I’d like to see reversed, at least for a while.

Maybe this Opel concept will have some impact, and maybe people will decide that a matte grey car would really look great with, say, a matching set of orange stripes and tires. Or a black car with yellow tires, or a green car with blue tires, or, really, anything. I mean, you can buy them today, it’s just that hardly anyone does.

It’s time to free ourselves of the prison of carbon black! Go, little Opel GT concept, be our vanguard of chromatic road-rubber freedom!