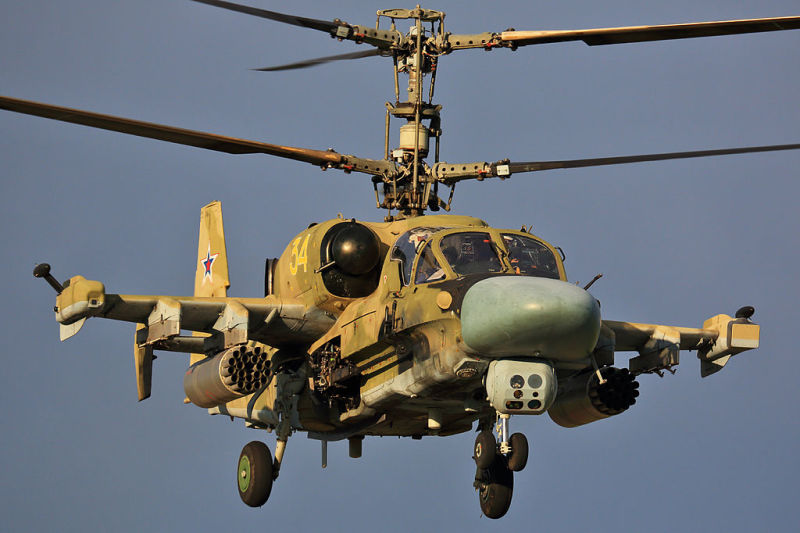 Russia says that its pullout from its air base in Syria will be complete in just two or three more days, but it is leaving behind a more potent attack helicopter force than what was ever there before.

Both the Mi-28 and the KA-52 attack helicopters have been spotted around the base within the last 24 hours. Here’s why the Kremlin is upping its combat helicopter capability just as it is pulling its fixed wing fighter and attack aircraft.

Throughout Russia’s military involvement in the Syrian conflict it has utilized advanced derivatives of the venerable Mi-24 Hind attack helicopter. This is primarily the Mi-24P model. The Kremlin decided to keep its much more advanced Mi-28 Havoc and Ka-52 Alligator attack helicopters at home for the conflict. But now these helicopters have finally shown up.

Russia’s attack jets have been active in recent days over Syria, but so have its attack… Read more Read more

The video below shows Russia’s tactical aviation units packing up and leaving the base, you can see the Mi-28 already flying around:

The KA-52 has been spotted in a series of photos from the base:

The arrival of Russia’s two most advanced attack helicopters is predictable on many levels.

First off, there is still a clear mission for Russian combat helicopters in Syria. The Kremlin has said that it will be leaving a residual force to keep its new base secure. This could likely even mean going on combat missions nearby in order to keep a safe buffer zone in the region. Attack and utility helicopters are the perfect tool for such a mission.

Then there is the fact that sending empty transports to pick up swathes of Russian gear and helicopters is a waste. Instead, Russia could fill those cargo holds during the first leg of their round-and-back trips with fresh helicopters. Swapping out some of the helicopters that have been in-theatre for six months months or more just makes economic and logistical sense.

Th job of protecting a large base in what is basically a war zone, or at least nearby a war zone, is an ever more risky task once forces deployed to the base thin out drastically. More potent attack helicopters, especially those that are optimized for nighttime operations, can act as force multipliers for security services still guarding the base. Not only do they have the most advanced visual surveillance systems available, but they can also pick up the slack for some of the fixed-wing aircraft’s attack capabilities that are being lost, at least for closer-in defensive and pinpoint strike operations.

These helicopters are key players in Russia’s present and future military arsenal, and like pretty much everything else in Russia’s inventory, they are for sale. Using the Syrian conflict as a big showroom and test track for Russia’s arms export business has been a nearly comical component of their whole excursion in Syria. Now, after all the other hardware has had their turn in the spotlight, it is now the Havoc and Alligator’s turn.

Finally, I have to return to my thoughts on the potential increasing presence of shoulder fired anti-aircraft missiles in the Syrian conflict.

In what seems at face value as a stunning turn of events, Russian President Vladimir Putin has… Read more Read more

None of the Russian aircraft that had been flying in the conflict had modern defensive aid suites that protect against man-portable air defense systems (MANPADS). Now, after a shoot-down of a Syrian MiG-21 by one of these weapons, and after Saudi Arabia’s top foreign minister stated that introducing shoulder-fired surface-to-air missiles into the conflict may be necessary to counter-balance Russian air power, these aircraft have rapidly exited the war zone.

What have arrived at least partially in their place are aircraft that are known to have more modern missile launch detection and infrared countermeasures suites that can be optionally installed. In other words, these high-end attack helicopters, when properly equipped, are far more suited for a battlefield with a MANPADS threat present than their predecessors.

Russia’s involvement in Syria may be winding down, but it’s not over yet.