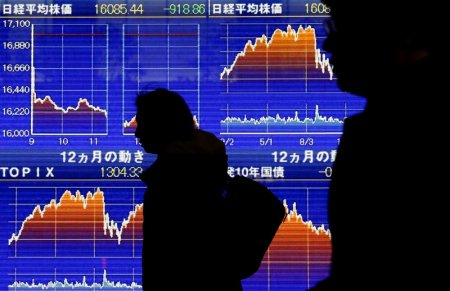 MSCI’s broadest index of Asia-Pacific shares outside Japan edged down 0.2 percent. The decline was limited after Wall Street shares cut most of their losses overnight and gave battered risk assets some relief.

Equity markets remained wobbly after being hit hard early in the week by worries about the health of the euro zone banking sector, with a very easy monetary policy seen crimping bank profits and consequently their ability to repay debt.

Trouble for equities has meant a boon for government bonds, with the Japanese government bond 10-year yield dropping into the negative for the first time on Tuesday and the U.S. Treasury benchmark yield declining to a one-year trough.

The yen, often sought in times of financial market turmoil, has also received a strong boost this week. The dollar traded at 114.96 yen after sinking to a 15-month low of 114.205 overnight. The euro was flat at $1.1288 after scaling a four-month high of $1.1338 overnight on the dollar’s broader weakness.

After a tumultuous start to the week, markets looked to Federal Reserve Chair Janet Yellen, who will address the U.S. Congress later in the session, for fresh cues and possible relief.

While Yellen is expected to defend the Fed’s first rate hike in a decade and likely insist that further rises remain on track, any signs of a departure from such a stance could provide risk assets with a breather.

In commodities, crude oil prices trimmed some of their sharp losses suffered overnight. U.S. crude was up 1.6 percent at $28.39 a barrel. Crude sank nearly 6 percent on Tuesday after weak demand forecasts from the U.S. government and a rout in equities pressured prices.