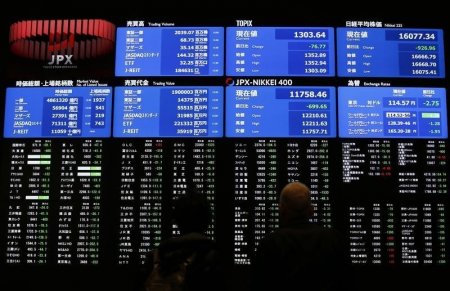 SYDNEY (Reuters) – Asian share markets got off to a cautious start on Monday as investors await a rush of February industry surveys to take the pulse of the global economy, while sterling suffered on concerns the UK might yet vote to leave the European Union.

A busy week for data culminates with a Group of 20 meeting that offer leaders a chance to soothe market concerns with talk of coordination, even if it produces nothing concrete.

Japan’s Nikkei eased 0.4 percent, hampered by the strength of the yen. South Korea lost 0.3 percent, while E-Mini futures for the S&P 500 dipped 0.2 percent.

While Wall Street ended Friday with a whimper, the major indexes still boasted their best weekly performances this year, with the Nasdaq tallying its strongest week since July.

“While we cannot definitively say the cycle/2016 lows are in place yet, the technical evidence continues to suggest a more durable bottom may be forming.”

The early price activity was in sterling which beat a hasty retreat as worries that Britain may quit the European Union flared up after London Mayor Boris Johnson threw his weight behind the exit campaign.

Sterling has just about completely reversed gains made on Friday after EU leaders agreed unanimously on a package of measures aimed at keeping Britain in the 28-nation bloc to avoid a potentially disastrous divorce.

Dollar bulls shrugged off data last Friday that showed underlying U.S. consumer price inflation accelerated in January by the most in nearly 4-1/2 years.

The figures should support the view that the Fed could gradually raise interest rates this year as forecast, but markets remained highly skeptical given the backdrop of slowing global growth and market turbulence.

Finance ministers and central bank governors from the Group of 20 rich nations gather in Shanghai this week to discuss those global headwinds.

There has been some chatter about a possible grand currency agreement that would allow for a depreciation in the U.S. dollar, which might relieve pressure on commodity prices and on emerging markets.

However, most analysts consider it very unlikely given so many of the G20 central banks are actively easing policy and need their own currencies to stay competitive.

Surveys on manufacturing and consumer sentiment on both sides of the Atlantic this week will offer clues about how much the strain of weak trade, investment and wage growth are spilling into advanced economies.