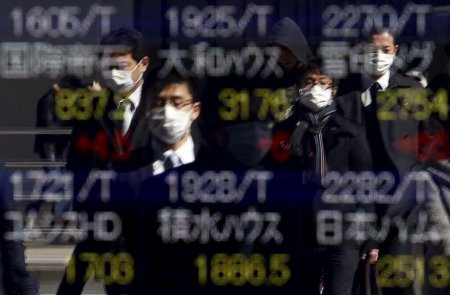 Thomson ReutersPedestrians wearing masks are reflected in an electronic board showing various stock prices outside a brokerage in Tokyo, Japan

The dollar got a mild boost from the suggestion that U.S. monetary policy could be tightened sooner rather than later.

Atlanta Fed President Dennis Lockhart said the central bank might be in line for an interest rate hike as soon as April, as policymakers’ decision to hold rates steady last week was more about ensuring that recent global financial volatility had settled down.

San Francisco Fed President John Williams told Market News International he would advocate for another interest rate hike as early as the April meeting, and Richmond Fed President Jeffrey Lacker said U.S. inflation is likely to accelerate in the coming years and move toward the Fed’s 2 percent target.

Japan’s Nikkei stock index added 2 percent, reopening after a public holiday on Monday and getting a tailwind from a weaker yen.

The dollar nursed losses last week after the Fed halved its outlook for interest rate increases to two from four by the end of this year and said an uncertain global outlook poses risks to the U.S. economy. The latest round of official Fed remarks allowed the greenback to take back some of that lost ground.

Sterling steadied but remained pressured by concerns about Prime Minister David Cameron’s ability to keep Britain in the European Union after leading ‘Out’ campaigner Iain Duncan Smith resigned from the cabinet late on Friday. It was last buying $1.4371 , well below Friday’s one-month high of $1.4514.

“A bit of internal party bickering doesn’t normally impact sterling but this time it has because of the possible implications for Brexit,” Jasper Lawler, market analyst at CMC Markets, said in a note.

The dollar index , which tracks the U.S. unit against a basket of six major rival currencies, added 0.2 percent to 95.451.

U.S. crude prices extended overnight gains made after data showed a drawdown at the Cushing, Oklahoma delivery hub for the oil. It added about 0.1 percent to $41.57 a barrel after rising 1.19 percent in the previous session. Brent was flat, after settling up 0.8 percent at $41.54 on Monday.