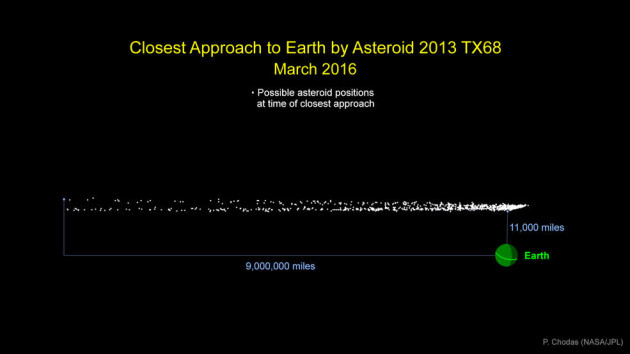 To be clear, NASA isn’t predicting the apocalypse just yet—there’s no possibility of an Earth impact. The agency does say, however, that scientists aren’t really sure what trajectory the asteroid is going to take when it does make its flyby in March. That’s not distressing at all!

Asteroid 2013 TX68 could fly past Earth as far out as 9 million miles, NASA said, or as close as 11,000 miles; the asteroid’s previous approach was about 1.3 million miles, so you can see how wildly its trajectory varies. Scientists are unable to nail down a precise path because the asteroid hasn’t been tracked for very long.

There is the tiniest possibility the asteroid, which is estimated to be about 100 feet in diameter, could impact Earth during its next flyby, in 2017, though the chances of that are 1-in-250-million. Pretty good odds, if you ask me, but scientists don’t seem the least bit concerned.

Although the asteroid isn’t considered dangerous by scientists, they’re still playing the “what if” game.

“If an asteroid the size of 2013 TX68 were to enter Earth’s atmosphere, it would likely produce an air burst with about twice the energy of the Chelyabinsk event [in Russia].”