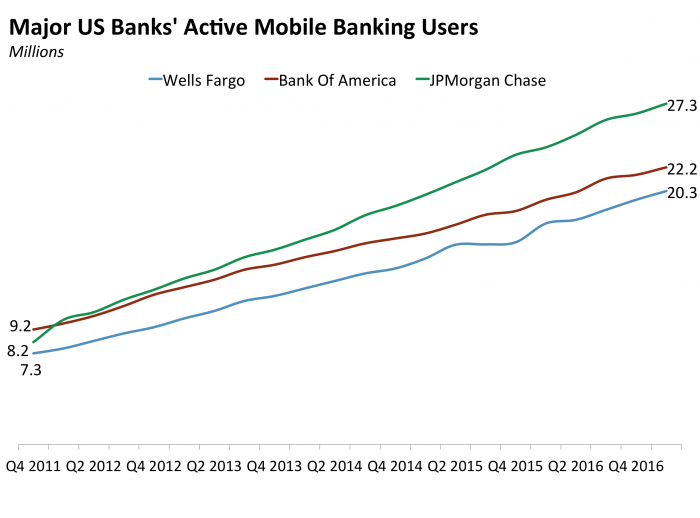 THE PAYMENTS INDUSTRY EXPLAINED: The Trends Creating New Winners And Losers In The Card-Processing Ecosystem

Bank of America has continued to show a willingness to invest in technology, which has helped the firm boost its digital and mobile banking segment in Q1 2017.

This helped the bank boost its digital growth:

Difficult market conditions and competition from digital savvy entrants have been challenging traditional banks. But a solution is emerging that will enable these legacy players to innovate at relatively modest costs: chatbots.

Chatbots are software programs that primarily use business-to-consumer (B2C) text-based messaging as the interface through which to carry out any number of tasks. They appeal to banks because they require less coding and are therefore cheaper than banking apps; they also automate currently manual back-end tasks, saving them money on salaries and allowing some operations to run 24/7.

Maria Terekhova, research analyst for BI Intelligence, Business Insider’s premium research service, has compiled a detailed report on chatbots in banking that looks at the drivers behind the proliferation of chatbots among incumbent banks, current chatbot use cases and their growing variety, and the strategic, consumer, and technological risks still attached to chatbots.