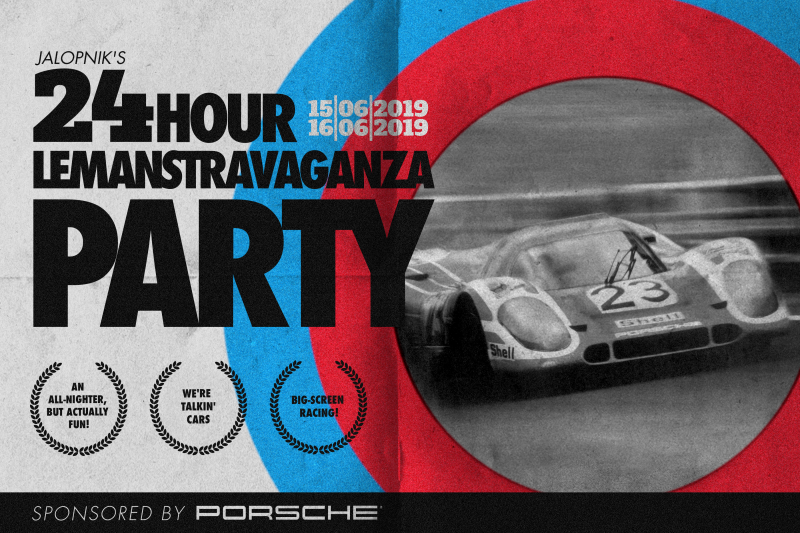 For reasons entirely beyond the scope of our own comprehension, we live in New York City, the town that truly despises the car. But in true Jalopnik tradition, we will rage against those forces that oppress us, and we’re going to throw a hell of a party while we do it. And since our 24 Hours of Le Mans party this weekend isn’t complete without some cars, here are some of the cars that will be joining us.

We’re Throwing Another Giant All-Day Party for the 24 Hours of Le Mans, and You Should Come

Three years ago, we packed some 200 people into Jalopnik’s New York headquarters during the 24…

The 2019 24 Hours of LeManstravaganza party’s this weekend, June 15 to 16 (yes, a FULL 24 hours!) at The Hamilton event space in Red Hook, Brooklyn, and there’s still room available inside for people, so sign up for it here. While there is plenty of street parking around where the party’s going to be at (so you should still feel more than free to drive on over), the little lot at the party spot can only fit five, six cars at most. That meant we had to be selective. Can’t just have Raph’s old Beetle there, you see, mucking up the place. No, this is a party for awesome, classy and/or not-at-all-classy people. And thus we needed some awesome rides.

Jalopnik’s first ever 25-hour party went off without a hitch, which is more than I can say for…

It sits in its original Tornado Red color, but that’s about it. Yes, it’s got the VR6 swap. Yes, it’s lowered. Yes, it’s got BBS wheels. Yes, there’s even more to it. You’ll just have to hear all about it from Brian himself at the party.

Unlike Brian, Steve didn’t get wordy with his 911. While he did get the requisite subject line in place, all he wrote in the body of the email was “930. 325 rwhp.” It speaks for itself.

What, you thought this would be a Jalopnik party without a wildly overpowered wagon? Get outta here. Ryan says that his E63—which, funnily enough, wasn’t the only E63 wagon submitted for consideration—was one of only 67 produced for the U.S. when it was built in 2007, and sports 507 horsepower. Not only that, his particular E63, in contrast to the others offered, sports the third row seats in the back-back, which is truly the greatest joy of any wagon. Also, he bribed us with an offer of a ride in the back-back, and you are INSANE if you think we are not above wagon-bribes such as this.

There will be even more special cars in abundance in the lot, and I’ll just give the hints of the words “RS,” “GT3,” and “underglow” to whet your appetites.

And if your car didn’t make it into the lot, or you’re just coming on your own two feet, don’t worry at all. Not only is there plenty of parking in the neighborhood, but we still have plenty of space at the party.

There will be food!

There will be drinks!

There will be movies!

There will be video games!

There will be Raph, torturing you with the crucible of his automotive trivia!

There will be racing!

And it’s all free. Did we mention the “free” part? Yes, FREE, thanks to Porsche, a car company, which is sponsoring the event.

Just RSVP here, and we’ll see you there.