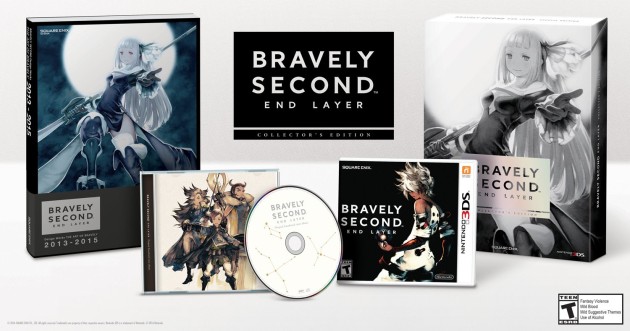 Unlike Dragon Quest fans, Square Enix never left its newly discovered Bravely Default groupies hanging in suspense over a localization. While I suspect that the two demographics share a considerable amount of overlap, Bravely Second was confirmed for a North American release two months after it launched in Japan.

Dragon Quest VII… three years. And we’re still not out of the woods yet for Dragon Quest XI. Smells as salty as the Pacific Ocean around here.

Anyway, we have confirmation that Bravely Default will be launching in North America on April 15. This should give you enough time to wrap up Fire Emblem Fates, launching in Feb, or any of the other countless JRPGs floating around the gaming space this year. Nintendo joined in to confirm that a demo titled Bravely Second: End Layer – The Ballad of the Three Cavaliers will be available on the Nintendo 3DS eShop before then.

In addition, Square Enix also revealed the inevitable Collector’s Edition, which comes with the game, soundtrack, a 250-page art-book, and a slick box. This will set fans back $69.99.

Bravely Default was a nice little throwback to the older days of Final Fantasy that still managed to make the genre feel fresh through its social aspects and ridiculous ending. Now, the time has come to see if the series has the legs to last thirty years like its inspiration. Will this be a flash in the pan, or does Bravely Second have enough power behind it to evolve the series into a staple of the JRPG genre?