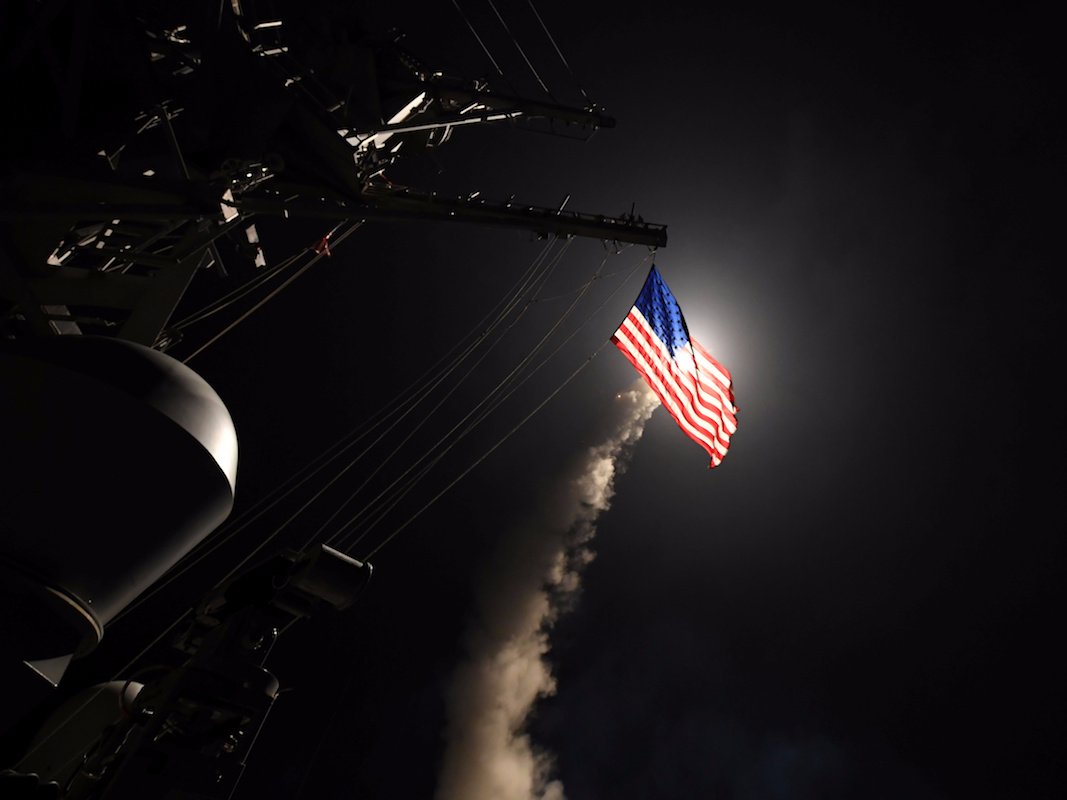 LONDON — The US launched 59 cruise missiles at an airfield and nearby military infrastructure controlled by Syrian President Bashar al-Assad on Thursday night, in response to a chemical attack that killed at least 80 people in the northwestern part of the country on Monday.

US President Donald Trump, initially reluctant to becoming involved in the Syria conflict, said it was in the vital national security interest of the US to prevent the use of chemical weapons.

“No child of God should suffer such horror,” Trump said in an address to reporters after the cruise missile strikes.

“It is in this vital national security interest of the United States to prevent and deter the spread and use of deadly chemical weapons.”

The Pentagon added the strike “was intended to deter the regime from using chemical weapons again.”

Trump’s decision to launch a direct attack on the Assad regime makes him the first western leader to do so since the Syrian conflict began in 2011. This is how Britain’s most high-profile politicians have reacted to the move.

A Downing Street spokesperson said: “The UK government fully supports the US action, which we believe was an appropriate response to the barbaric chemical weapons attack launched by the Syrian regime, and is intended to deter further attacks.”

Defence Secretary Michael Fallon was keen to stress, though, that the attack was not the beginning of an international campaign as seen in other troubled Middle Eastern countries like Iraq.

“This strike was very limited to one airfield, it was entirely appropriate, it’s designed to deter the regime from carrying out further chemical weapons attacks. So we don’t see it as the start of a different military campaign.

“We’ve not been asked to be involved in this, this was not a matter for the coalition that’s in Syria and Iraq fighting Daesh,” Fallon added. “This was a United States operation, but let me emphasise again we fully support it.”

Watson described the US attack as “a direct and proportionate response” to the Syrian regime’s use of chemical weapons in an interview with the Birmingham Mail.

He added: “indiscriminate chemical weapons attacks on civilians can never be tolerated and must have consequences.”

We are still waiting on an official statement from the Labour Party.

Farron joined the Conservative government in supporting Trump’s decision but called on the May to consider more meaningful action such as further strikes on the Assad regime.

“The attack by American forces was a proportionate response to the barbarous attack by the Syrian government on its own people.

“The British government rather than just putting out a bland statement welcoming this should now follow it up and call an emergency meeting of the Nato alliance to see what else can be done, be that more surgical strikes or no fly zones.

“Evil happens when good people do nothing, we cannot sit by while a dictator gasses his own people. We cannot stand by, we must act.”

Nuttall, who has been a vocal critic of past military intervention in the Middle East, described the attack on the Assad regime as “rash, trigger happy” and “nonsensical” in an official statement.

He added: “The whole world rightly condemns the use of chemical weapons in Syria, but the US attack on the Assad regime does nothing to lower tensions, nor will it hasten peace in that country.

“Too often rash responses to horrific situations are about the conscience of the attacker, rather than a clear-headed response to an awful situation.

“There are currently no good options in Syria. Assad or ISIS is not a choice anyone would wish to make. But firing off missiles in an enraged response shows weakness not strength in the face of horror.

“I hoped for better from this administration.”

Former UKIP leader and Trump ally Farage questioned the US President’s decision to attack the Assad regime. He tweeted:

Many Trump voters will be worried about this military intervention. Where will it end?

This is a developing story…