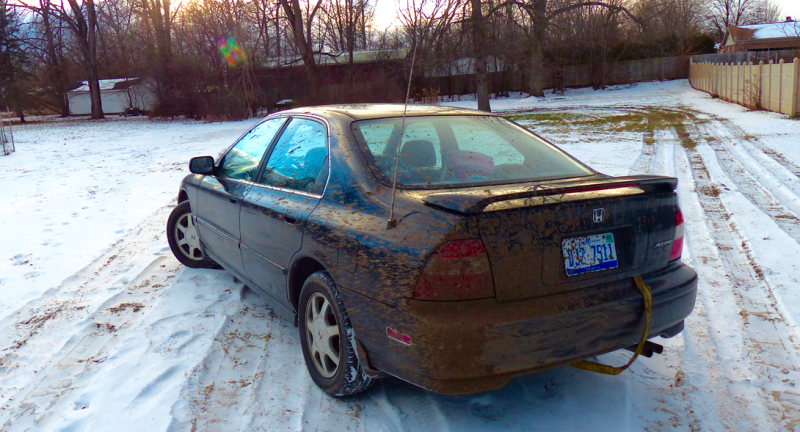 To get the most enjoyment out of your winter beater, you’ll need to alter in your mind the very notion of “reliability.”

I recently read a Road & Track article with the main argument being that you don’t want an unreliable piece of crap when it’s freezing outside. For the most part, I agree. But I need to mention the real key to owning a beater:

Redefining what constitutes a “crappy” car.

In a recent story, I called my 1995 Honda Accord the “most unreliable Honda in the world.” It’s true by most measures, but it’s not true by “winter beater” measures. That’s because my standards for winter beaters are much, much lower than my standards for normal cars. And if you’re buying a beater, yours should be, too.

Here’s what I mean. My Honda’s radio doesn’t work, the rubber cover for the right lower ball joint is shot, the passenger-side tie-rod end rubber boot is gone, the brakes squeak, fifth gear grinds, the exhaust bangs, the water pump leaks, the valve cover leaks, the clutch master cylinder leaks and there’s rust on the rear quarter panels. All of these things really suck, and on a nice daily driver, they would be rather upsetting. But on a winter beater? Pssh. Totally fine.

(Edit: I should be clear that I’m an experienced wrench, so I inspect the suspension and brakes to make sure the car isn’t a danger to the public. But because it’s a beater, I let a lot more slide than I would normally. So long as it’s not going to fall apart.)

My requirements for a winter beater are pretty simple then. Drive, and provide heat to the cabin.

That’s it. There’s nothing else.

And because I went in with this mentality, despite its many problems, I don’t regret buying my Honda. After all, it’s keeping my precious Jeeps from crumbling into piles of Fe2O3. Sure, I have to fill it with coolant every few days, but it’s fulfilling its primary function. That’s all a beater has to do.

So if you’re willing to give up comfort and maybe a bit of safety, go right on ahead and buy that $500 junker you’ve been eyeing. Anything to keep your beautiful daily driver from bowing to the whims of old man winter, right?

But if you’re not down with lowering your standards, and you let little quibbles like small leaks and weird noises startle you, then you should probably heed Road and Track’s advice and think twice.

Meanwhile, I’ll be hooning the living bejesus out of my Honda, enjoying every minute.