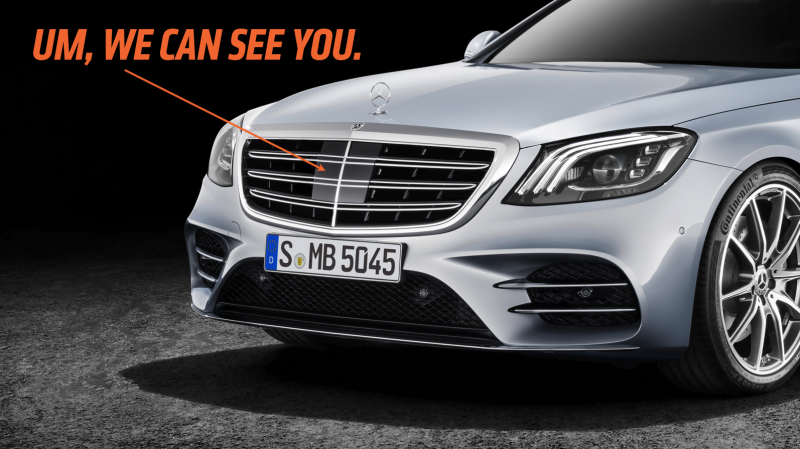 Have you looked at the grille of a new Mercedes-Benz S-Type? At first glance, it looks essentially like the modern version of the iconic Benz grille, Until the light hits it just right, and you see a weird, shiny rectangular block right in the middle, attempting to camouflage itself into the rest of the grille. It looks weird. It’s the car’s radar emitter, and it’s a great example of why trying to hide these things in grilles doesn’t work.

Modern driver assist features like dynamic cruise control, emergency braking, and semi-autonomous driving require new sensors cars never needed before: specifically, radar emitters. Many premium cars have these emitters, and for some weird reason many of these cars seem ashamed of this bit of equipment.

There’s a persistent trend to try and hide the emitters in the dark, open areas of a car’s radiator grille, and it pretty much never, ever really works. The Hyundai Genesis is also a good example of how poorly this usually comes off. You’re not fooling anyone; people can tell what’s an actual grille opening and what’s a glossy bit of plastic with fake grille bars stuck on it.

Shit like this reminds me of old, crappy Montgomery Ward TV sets that would have one real speaker grille, and then one fake one, in hopes of fooling you into thinking you were getting that real stereo experience while you watched Perfect Strangers. Hiding these emitters feels like the car’s design is trying to pull something over on us.

I think most people appreciate honesty in design. That’s why we laugh at fake wood paneling and fake stitching molded into the plastic of a Chevette’s steering wheel, and, of course, fake air intakes and grilles.

But you know, maybe it’s not even the dishonesty of hiding that bothers me; it’s how half-assed all the hiding is. If we look at Mercedes again, they’ve shown they can hide this equipment well when they want to. Look at their alternate grille design that hides the equipment in the large, central badge, compared to the fake-grille-area approach:

See? Hiding in the badge works. The badge isn’t expected to be a grille, and it works just fine solid and glossy. In the other grille design, you just have this confusing block of gloss that distracts needlessly from the look of the car.

It’s time for car designers to not just grudgingly accept, but to really embrace the new set of sensors that cars have. These elements need to be accepted as design features of the front end of a car, just like headlights and turn indicators and air intakes and all that.

These are features that define truly modern cars! They should be emphasized and celebrated, right! They could be one more thing that sets premium cars apart from the poor unwashed masses of radar-deficient cars. What if Mercedes took all the sensors they use and need for all their advanced functions, cameras and radar windows and ultrasonic sensors and all that, and gave them a position of pride?

Okay, I’m sure a real car designer would do much, much better, but you see my point. These aren’t things that have to be hidden. Hiding them feels weird. It’s time to accept the challenge, and design with these things, instead of pretending they don’t exist.

Because, let’s face it, with the coming of autonomous cars, they’re not going away.

Man, I hope I didn’t kill my point with those two shitty Photoshops.

One of you in the comments make a better mockup than I did, please.

Why Do All These Electric Cars Have Grilles?