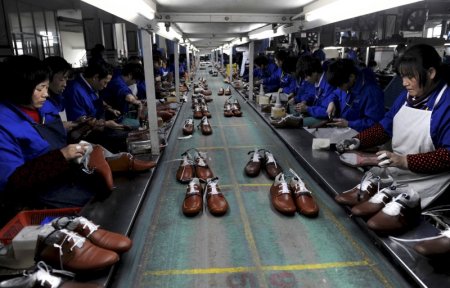 SHANGHAI (Reuters) – Activity in China’s manufacturing sector shrank for the seventh month in a row in February and more sharply than expected, an official survey showed, suggesting the government will have to ramp up stimulus to avoid a deeper economic slowdown.

Some investors had been bracing for a negative after the central bank unexpectedly eased policy late on Monday, injecting an estimated $100 billion worth of cash into the banking system to cushion the pain of upcoming reforms such as restructuring bloated state enterprises.

The official Purchasing Managers’ Index (PMI) fell to 49.0 in February from January’s reading of 49.4 and below the 50-point mark that separates growth from contraction on a monthly basis.

Economists polled by Reuters had expected only a slight dip to 49.3.

China’s factory sector has been under pressure from weak demand at home and abroad and massive overcapacity in key industries such as steel and coal, making it highly resistant to the impact of six central bank interest rate cuts and a spate of other support measures since November 2014.

In addition, some manufacturers in capital-intensive sectors are struggling with heavy debt loads, which are becoming increasingly difficult to repay as they have to constantly cut prices to win sales. Last year witnessed a rash of bond defaults by steel, cement and chemical firms. Chinese factory gate prices fell for the 47th straight month in January.

The government has made cutting overcapacity in steel and other “old economy” sectors a priority this year, although previous efforts have run into strong resistance at the local level, as large industrial firms are often a key source of tax revenue and employment.

China said on Monday it expects to lay off 1.8 million workers in the coal and steel industries, or about 15 percent of the workforce, as part of efforts to reduce industrial overcapacity, but no timeframe was given.

China’s economic growth cooled to 6.9 percent in 2015, the slowest pace in 25 years, and economists see it slowing further to around 6.5 percent this year. Some market watchers believe it is already much weaker than official data suggests.

China’s services sector, which has been taking up an increasing amount of economic slack as manufacturing cools, continued to expand in February but at its slowest pace since late 2008, during the depths of the global financial crisis.

The official non-manufacturing Purchasing Managers’ Index (PMI) fell to 52.7 from January’s 53.5, but remained well in expansionary territory, according to a similar sector survey by the National Bureau of Statistics (NBS).

With manufacturing in a prolonged funk, Beijing has been keen to grow the services sector and make consumption a stronger driver of the economy. But analysts have wondered how long services can remain resilient in the face of the deepening drag from the factory slump and widely expected layoffs.