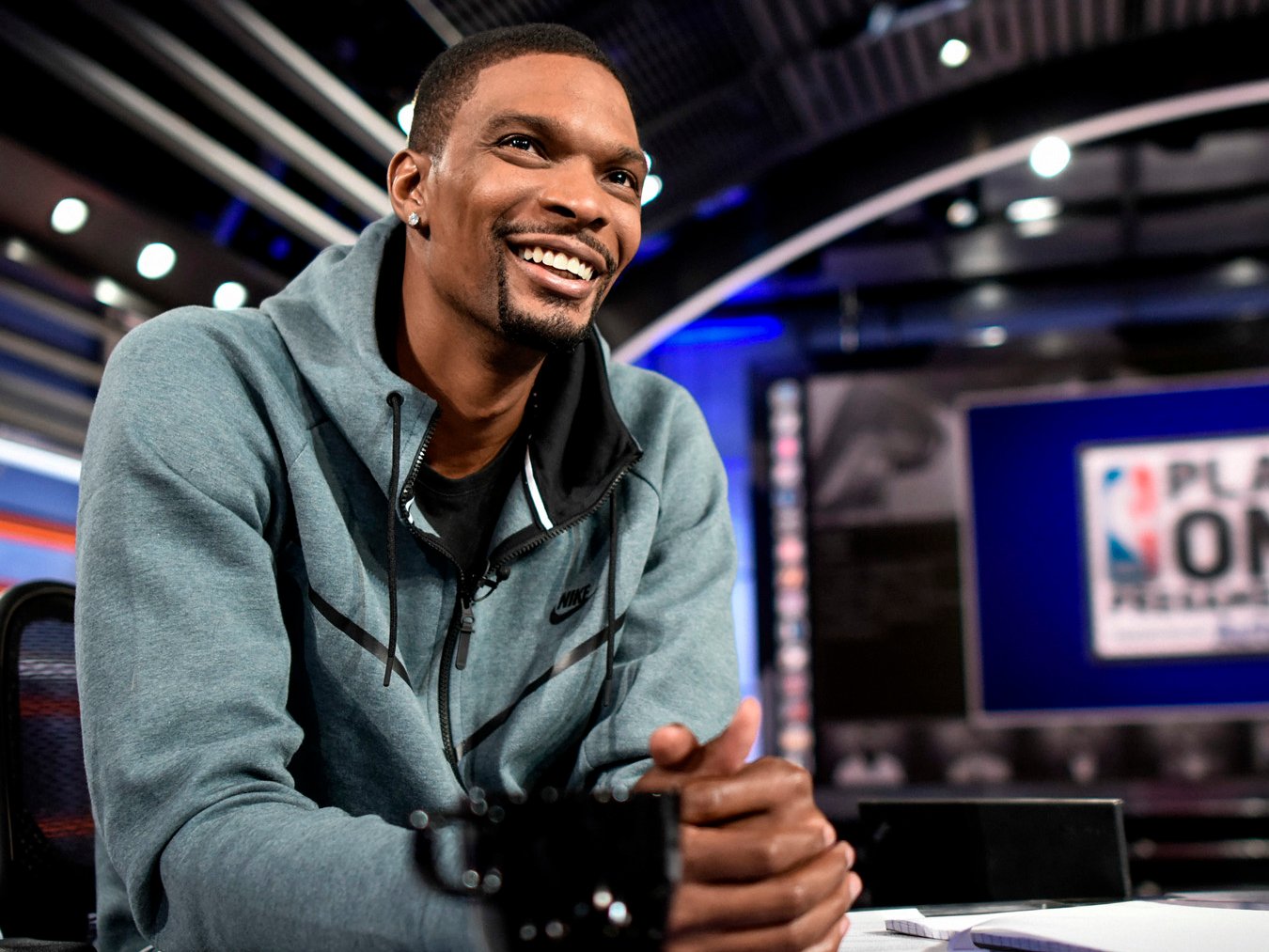 Chris Bosh works as a studio analyst for TNT’s “Players Only” on Monday nights.TNT

A typical day for Chris Bosh sounds like a normal day for many people.

He’ll wake up, work out, help his wife around the house, practice guitar, hang out with his kids, go out to dinner, then call it a night by watching some TV.

Of course, this isn’t what Bosh was planning to do in the middle of the NBA regular season at 32.

Bosh’s NBA career has been put on hold. He has twice had a season end prematurely when tests found blood clots in his legs; one traveled up to his lungs during the 2014-15 season. At the start of training camp in 2016, when Bosh was on blood thinners, the Miami Heat said they were no longer working toward Bosh’s return to the court.

Forced off the court but still under contract with the Heat, Bosh has had to examine himself and determine what he wants to do with his newfound free time.

“I have to be extremely creative, more creative than I’ve ever been in my life, because that’s such a tough question to ask,” Bosh told Business Insider. “When money is not an object, what kind of picture do you want to paint? What do you want to create? Pretty tough question.”

Recently, Bosh has become a more public figure, as part of TNT’s “Players Only” NBA broadcasts, in which former players hold down the studio and call the games, combining color commentary and play-by-play. Bosh was approached by Turner at the Consumer Electronics Show in Las Vegas in January. Pitched to do five “Players Only” shows, Bosh accepted the offer.

“It wasn’t a long-term commitment — which I’m not looking to commit to anything long-term right now — and they had what seemed to be a very cool offer,” Bosh said. “So I went ahead and took it. It seemed like a great cast of guys.”

Bosh has adjusted well so far, he says. He tries to mix in fair analysis and criticism, suggesting solutions to problems — which he says some critics forgo. He said he believes his experience as a player helps his analysis.

Music has become perhaps Bosh’s biggest passion. He’s started playing guitar, taking lessons and learning on his own, experimenting based on the advice of some “great guitar players” he has talked to.

“You have to pick it up every day and just figure it own on your own,” Bosh said. “One of the cool elements to music is that’s a huge component of it. You have to — it has to be a feeling, a thing that you hear.”

Bosh — a fan of blues, old country rock, and pure rock and roll — has been recording in his home, learning the ins and outs of making and developing music.

Though he says he brings his guitar with him everywhere he goes — in January, he played on stage with the blues legend Buddy Guy — he mostly has kept the passion to himself.

“I haven’t found my band yet, no,” Bosh said, laughing. Bosh dabbles in other projects, too, though none as much as music. He has long been into craft beer and home brewing, once collaborating on a beer with Dogfish Head Brewery, but he says the arduous process has delayed that hobby a bit.

“It’s like one of those things if you make a mistake, it could be six weeks down the drain,” Bosh said. “By myself, it takes a good solid seven hours just to get something that’ll start fermenting. I will always be into it, but I need to find a better system.”

“Or just, like, go to a brewery and hope they could put some stuff to the side for me,” he said.

He also said he plans to get into film — he said he was working on a few projects but didn’t reveal further details.

Bosh’s sunny disposition is despite what he says is an “unfortunate situation.” Calling 2016 a “rough year,” Bosh said he has learned to look for the good in being away from the game.

“I quickly learned how to just take everything in stride and just enjoy the moment that I’m at,” he said. “Indeed, it was an unfortunate situation, but I know it could be much worse, and I have a family to provide for and things of that nature, so it made me have to break down true perspective.

“In the world, in the things that I’ve done and the places that I’ve seen, I’m pretty lucky. I just use that as kind of a motivation to say, ‘Hey, things will be alright. I’m right where I need to be, and, you know, it could be worse.'”

Being away from the NBA has had its perks, too. He doesn’t miss the aches and pains of the season, and he has enjoyed being around his family more.

“That’s one thing I realized is how much that I’m gone from my children and my wife and my home. You just realize how tedious the schedule is, and those flights and cold cities — Miami is a luxury — and hotels … those walls close in on you. It’s not easy. It’s definitely a tough job.”

It’s unclear what happens next for Bosh as far as basketball goes, but as he said, he’s not making any long-term commitments. Reports circulating in the NBA say the Heat will eventually buy Bosh out, making him a free agent. Whether another team would take a chance on him, given his health issues, is uncertain.

Bosh said he’s excited about what the future holds, whether or not it involves basketball.

“I think that’s, like, such an exciting thing,” he said. “I felt like I was chosen to play basketball when I was younger.

“I’ve had to ask myself [what’s next] over and over. And that’s the things I think about as far as my legacy as a man and the things I accomplished, what I meant to my family. And that’s, like, totally up in the air. It’s kinda cool. So just really focused on having fun and just expressing myself.”