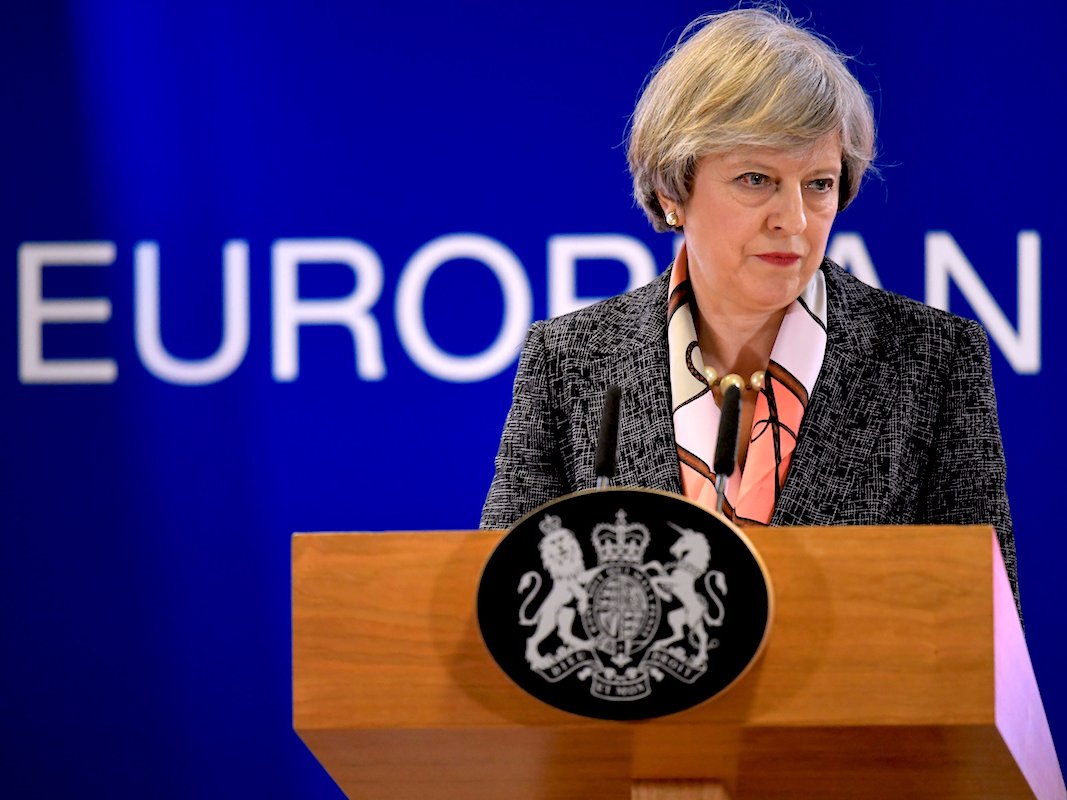 When UK Prime Minister Theresa May delivered her keynote Brexit speech in January, she spoke from the exact same London venue that Margaret Thatcher declared the European Union, in its earliest form, “open for business” in 1988.

Britain’s former prime minister Thatcher was one of the EU’s main architects, but May will be remembered as the British premier who oversaw Britain’s exit from the 28-nation bloc, fundamentally reshaping the body as a result.

The decision of the British people to vote to leave the 28-nation bloc in the June referendum was widely regarded as the country’s most significant political event since the end of World War II. It was the decision to wrench Britain from a family of nations that it had been part of for nearly 50 years. It dealt a huge body blow to the European Union.

This week May told her cabinet that the Article 50 letter she intends send to the European Union on Wednesday, March 29 will be “one of the most important documents in our government’s recent history”.

The letter will formally notify the EU of Britain’s exit and trigger a two-year negotiation process that will lay the foundations for a whole new chapter of British history — as a European nation no longer in the European Union.

Before 2009, and the creation of Article 50, there was no clear way for member states to exit the European Union.

It was passed as part of the Lisbon Treaty — an international agreement signed by all EU member states.

The key parts of the text states that any country wishing to leave the EU must do so by their own “constitutional arrangements” and that EU treaties will cease to apply to the exiting exactly two years from notification.

Prime Minister May will trigger Article 50 on Wednesday. The EU is expected to respond within 48 hours.

Once the EU acknowledges the notification, a two-year exit process will officially get underway, whereby Britain and EU negotiators will try to reach an agreement on a divorce deal that both sides deem reasonably satisfactory.

How did we get here?

In the run-up to the 2015 UK general election, former prime minister David Cameron promised to hold a nationwide referendum on Britain’s membership of the EU if he was elected for a second time.

True to his word, Cameron started his second term, and then announced a referendum would take place on June 23, 2016.

The campaign was long, hard-fought, and at times controversial.

Cameron and the vast majority of Britain’s most senior politicians advocated for “Remain” while the “Leave” movement was fronted by now foreign secretary Boris Johnson and former leader of the UK Independence Party Nigel Farage. Similar to President Trump’s victory in the recent US election, most pollsters and commentators in Britain were proved wrong in their predictions of a narrow Remain win, with the public voting 52% to 48% in favour of leaving.

The result triggered a political earthquake. Cameron resigned as prime minister and was later succeeded by May. The Labour Party tried but ultimately failed to oust leader Jeremy Corbyn. British politics had been rocked to its core.

May has since been cautious on the issue of Brexit. For a long time, she played her cards close to her chest, refusing to reveal the government’s progress in preparing to leave the EU or what she hoped to achieve in negotiations.

However, we now know that Britain is set to drop out of the EU in March 2019 and will almost certainly leave the EU’s essential core institutions: the single market and the European Court of Justice.

The European Court of Justice is the EU’s highest court and ensures that all member states comply with EU law. By cutting ties with the ECJ, Britain will no longer be subject to EU law and British parliament, Brexiteers argue, will be completely sovereign.

The referendum was 10 months ago — why has this taken so long?

May is not renowned for taking risks. She is a famously strategic, cautious politician, who has made clear that she would take her time with Brexit and not rush triggering Article 50.

Plus, Britain needed time to prepare for talks. It is set to be a mammoth diplomatic task requiring the expertise of hundreds of experts. The government has spent the last few months putting together a team for negotiations.

What has happened since?

British public opinion remains pretty much unchanged on whether the country should leave the EU.

Numerous polls published since the June referendum have shown that the British public still narrowly favours Brexit despite warnings of economic apocalypse and political turmoil. A YouGov survey published in late-January found that 46% of Brits felt that Brexit was the right decision, compared to 42% who said it was the wrong decision.

The public remains divided — and Britain’s political parties are, too.

A war erupted inside the Labour Party, the government’s official opposition, over leader Corbyn’s decision to make the party’s parliamentarians vote in favour of May triggering Article 50.

May’s Conservative Party is split between “hard Brexiteers” who want a quick, clean and total divorce, and party moderates who are keen to respect the referendum result but are concerned about the consequences of Britain abandoning its biggest trading market.

Brexit has also raised new questions about Britain’s place on the world stage. UK politicians watched on uneasily as May was pictured hand-in-hand with President Trump in Washington, whose contentious travel ban and controversial remarks triggered huge protests in London and cities across the country.

The US is one of a handful of non-EU states that May hopes will be major parts of Britain’s post-Brexit international trade network.

Whether Trump, with his “America first” policies, is as keen to sign up the US to such a network remains to be seen.

So, what happens next?

Although the two-year Article 50 process is set to be activated next week, talks between Britain and the EU probably won’t get underway until at least May. The 28-nation bloc has publicly stated that it wants time to prepare.

The two years will be spent thrashing out a divorce deal that both sides can agree to.

One of the key issues will be how much Britain must pay to the EU before it leaves. The latter wants Britain to hand over approximately £50 billion ($62 billion). Britain is keen to try and negotiate a significantly reduced figure.

Another issue will be whether May wants to arrange a transitional deal to fill the gap between Britain dropping out of the EU and agreeing to a new, long-term trade deal with the EU. Most experts expect a long-term UK-EU trade deal to take at least five years to finalize, meaning a temporary arrangement will be needed in the meantime.

For the EU, the next few years represent one of the most crucial chapters in its history. EU Parliament head Guy Verhofstadt told Business Insider that Brexit was an opportunity for the EU to become a tighter, more unified family of nations, but this ambition is under threat from populist, anti-EU movements in numerous member states.

The failure of far-right populist Gert Wilders to win the recent Dutch election was a boost for the EU but a possible threat awaits in the prospect of French President Marine le Pen, a far-right, anti-immigration candidate, who has promised to hold a referendum on France’s EU membership if elected: The same promise Cameron made.

It is worth noting, though, that continent-wide surveys conducted since Brexit show that support for the EU generally remains reasonably high across the 27 remaining member states despite the rise of populist movements, bar the obvious exception of Greece, which has been in an economic stand-off with the EU for a number of years.

What are the implications of all this?

The spectre that looms over pretty much every aspect of Brexit is uncertainty.

Despite the best efforts of politicians, experts, and journalists to predict how the political landscape will change over the next few years, nobodyreallyknows what it will happen. What May wants to achieve at the negotiating table could be radically different from what she actually leaves Brussels with — but, then again, it could be very similar.

But uncertainty carries heavy baggage of its own.

EU citizens currently living in Britain will worry for their futures until their right to remain is guaranteed. British businesses will wait anxiously to see how their ability to trade will be impacted once Brexit is completed. The general public will hope that the economy is resolute in the face of uncertainty and doesn’t fall into another recession.

If populism remains a force to be reckoned with across Europe, then member states holding referendums of their own cannot be ruled out, especially with issues like immigration and unemployment only growing in salience.