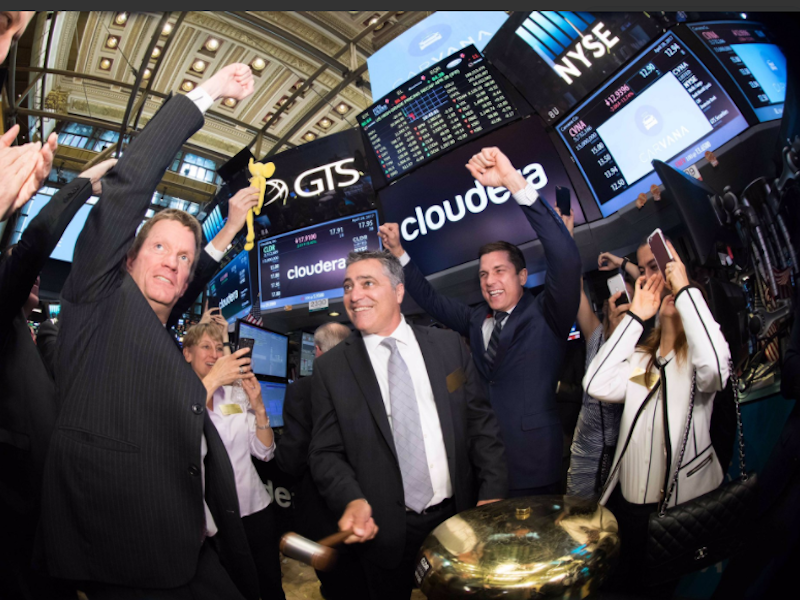 Big data software company Cloudera completed its much-anticipated IPO on Friday and the stock was a hit with investors.

The world was quick to point out that at $18, the public market is valuing the company at $2.32 billion, but after its last round of private financing, Intel paid roughly $30 a share, pouring about $742 million in, a valuation of $4.1 billion.

Intel then bought more shares from other stockholders for a total of $766.5 million, according to the S-1 forms the company filed with the SEC.

But Intel’s investment came two months after Cloudera had raised a typical round of investment from late-stage VCs that valued Cloudera at $1.76 billion, and Intel bought into Cloudera for strictly strategic reasons, Cloudera cofounder and chief strategy officer Mike Olson confirmed to Business Insider.

So, besides Intel, the other investors saw their investment in Cloudera increase today.

“Every financial investor was thrilled by our performance today,” a jubilant Olson said. “While Intel was a major source financing, it is a strategic [partner].”

Intel was happy enough to grab a chunk of Cloudera. Big data applications like Cloudera’s are a major reason that companies buy Intel servers, and so it’s in Intel’s best interests to help this company succeed.

For the handsome share price it paid, Intel also gets the inside skinny on if Cloudera entertains acquisition offers. But Olson says he’s got no interest in being acquired. “We always believed we were building a long-term standalone business, from the early days,” he says.

Well, that’s mostly true: Back in 2012, co-founder Amr Awadallah told us that he believed Cloudera could be the next Oracle, and that he wanted to do an IPO but would consider selling it for a lot of money.

“We are building this to be a huge, huge company,” he said back then. “My preference is to go public but it could be a big suitor taking it.”

Speaking of Cloudera’s cofounders, the street was gossiping about them a bit, too. Although Cloudera had four of them, only Olsen’s interests were disclosed to the public on forms filed to the SEC.

Over the years, Cloudera had raised so much money, and sold off so much of itself, that none of them owned 5% or more of their company. The stakes of all 5% stockholder must be disclosed to the public.

Olsen still owns over 5 million shares, which amounts to 4% of the company. He is now the chief strategy officer. Cloudera’s current CEO, has a bigger stake. He owns over 7 million shares, or just over 5%. Cofounder Amr Awadallah is still the companies CTO, too, but is not considered a named officer (a top exec), so his stake and salary were not disclosed.

Founder Christophe Bisciglia (Google) left the company long ago, back in 2010.

And, Olson confirmed to Business Insider that Jeff Hammerbacher also left the company. He’s been a professor for the past few years, most recently teaching at the Medical University of South Carolina, according to his LinkedIn profile.

SEE ALSO:The founders of a $1.3 billion startup raised $250 million while keeping over 50% of the company for themselves