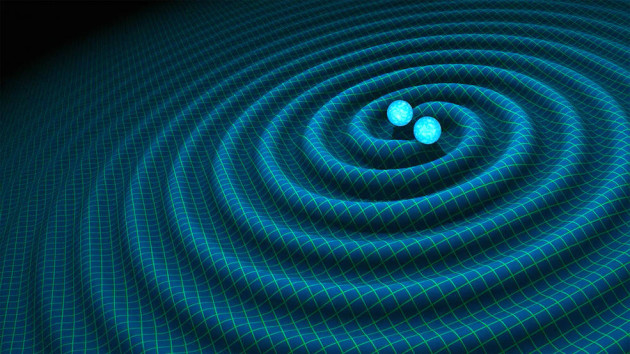 Earlier this month, scientists discovered the existence of gravitational waves, proving a hundred-year-old theory made by Einstein. It was a historic discovery and proved there are indeed ripples in the fabric of space-time. The visual at the bottom of this post best shows what gravitational waves are, but in case you want a more thorough explanation, check out the video above.

Theoretical physicist Brian Greene was a guest on The Late Show with Stephen Colbert, where he explained exactly how gravitational waves work.

“A gravitational wave is actually a ripple in the fabric of space,” Greene explained. “If you throw a pebble into a pond, the water ripples. This is a ripple, not with water, but in space itself.”

Think of it this way: In Einstein’s theory of general relativity, he predicted that gravity comes from warps in the fabric of space. A huge body like the sun warps the space around it, keeping planetary bodies orbiting around it. As Colbert suggests, it’s kind of like putting a bowling ball on a trampoline.

Later in the segment, Greene shows Colbert a fun little model version of how the Laser Interferometer Gravitational Wave Observatory (LIGO) was able to observe these ripples in action.

If you’re at all curious about the discovery of gravitational waves, the video above is a must-watch.