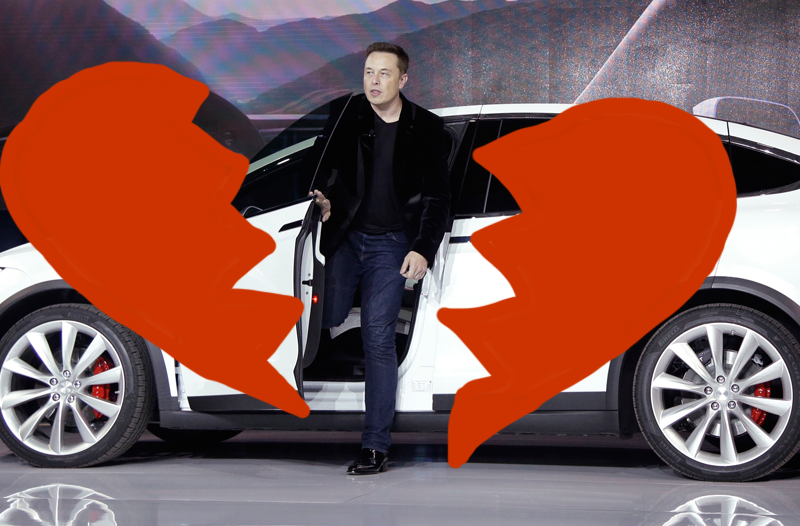 When it gave the Tesla Model S an unprecedented 103 out of 100 score last August, Consumer Reports looked like it might try to marry Elon Musk’s company and have its little electric car babies. But after a year of disappointments, trust violations and janky-ass door handles, it seems the magazine can no longer advocate true love.

On Monday, Tesla made its debut at 25 out of 28 on Consumer Reports’ annual car brand reliability rankings, putting the company just above Dodge (yikes!) and just below GMC (double yikes!).

More than any other factor, Tesla’s poor placement can probably be attributed to the Model X, which was plagued by door, window, seat, interior and exterior issues. Rated by Consumer Reports as the sixth least reliable car of 2016, the cheapest version of the Model X was recently axed by Tesla just three months after it was first introduced. From The Washington Post:

The rough review, based on annual surveys of the magazine’s subscribers, marks only the latest hurdle for America’s youngest major automaker, which has energized the country’s scrawny electric-car industry but has also struggled with repeated production and delivery delays.

Tesla’s sedan, the Model S, was recommended by reviewers after its reliability scores improved from what Consumer Reports last year called a “worse-than-average overall problem rate.”

But the Model X, which first rolled out to drivers last year and now starts at $74,000, was panned by drivers frustrated by problems with doors, locks, latches, power equipment, in-car electronics and the climate system. It ranked last for reliability among a dozen luxury mid-sized SUVs.

In a statement to CNBC, Tesla acknowledged the Model X’s problems while stating its commitment to “making the world’s most reliable cars.”

“The amount of issues we’ve addressed with Model X has fallen by 92 percent in the last 12 months, a reflection of our ability to make continuous improvements and react quickly,” said a company spokesperson. “This commitment is one of the reasons why Tesla won AutoPacific’s highest vehicle satisfaction award in 2016.”