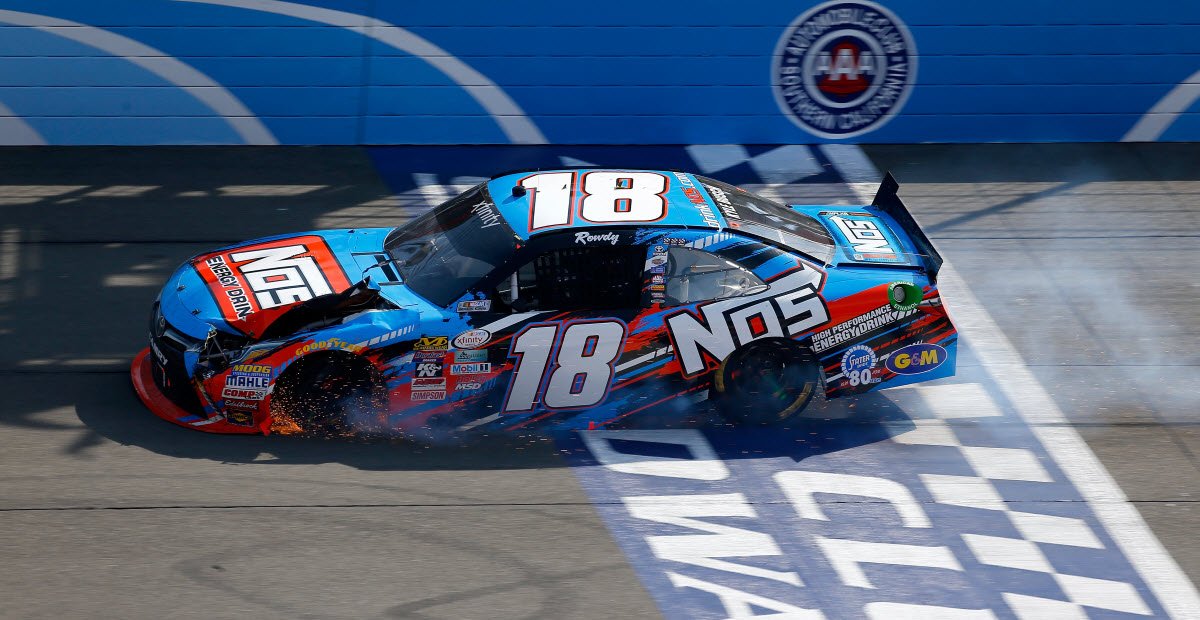 Austin Dillon won a wild race in the NASCAR Xfinity race in Fontana on Saturday, coming from way behind on the final lap thanks to a blown tire and some empty gas tanks.

The fun began with three laps to go with Kyle Busch holding a sizable lead. Erik Jones, who was in second place at the time, ran out of gas, leaving Busch with an eight-second lead over Daniel Suarez, a huge lead in car racing. None of these drivers would cross the finish line first.

At this point, Busch’s pit crew informs him that he needs to conserve gas, saying over the radio, “save all you can, all you can.”

With two laps to go, Busch still has the lead, but it is shrinking. Suarez is now less than five seconds back and Dillon has moved into third place, but is still a whopping 13 seconds behind the leader.

Busch (No. 18) has clearly fallen off the pace as lapped cars are now passing him with ease as he tries to save gas.

As they pass the white flag for the final lap and go into Turn 1, things start to get crazy.

Busch blows a tire and Suarez (No. 19) flies right by him like he is standing still.

Dillon can now be seen behind Busch, Suarez, and four other cars, coming out of Turn 2 as the leaders drive down the backstretch. With Suarez now out of gas, Busch goes by him as they enter Turn 3. Busch is now leading the race with a flat tire and about a one-third of a lap left. But it wasn’t to be for Busch.

Dillon has gas, four tires, and plenty of speed. He goes high on the track to pass as they enter the final turn. Busch tries desperately to block. Dillon nearly spins, but is able to keep it together.

Dillon gets by and sprints to the finish line for the win. Wow!

It’s 2016, so there was only one thing left to do: Dillon got out of his car and did a dab, because of course he did. NOW WATCH: Bill Nye has a ‘bone to pick’ with NASCAR