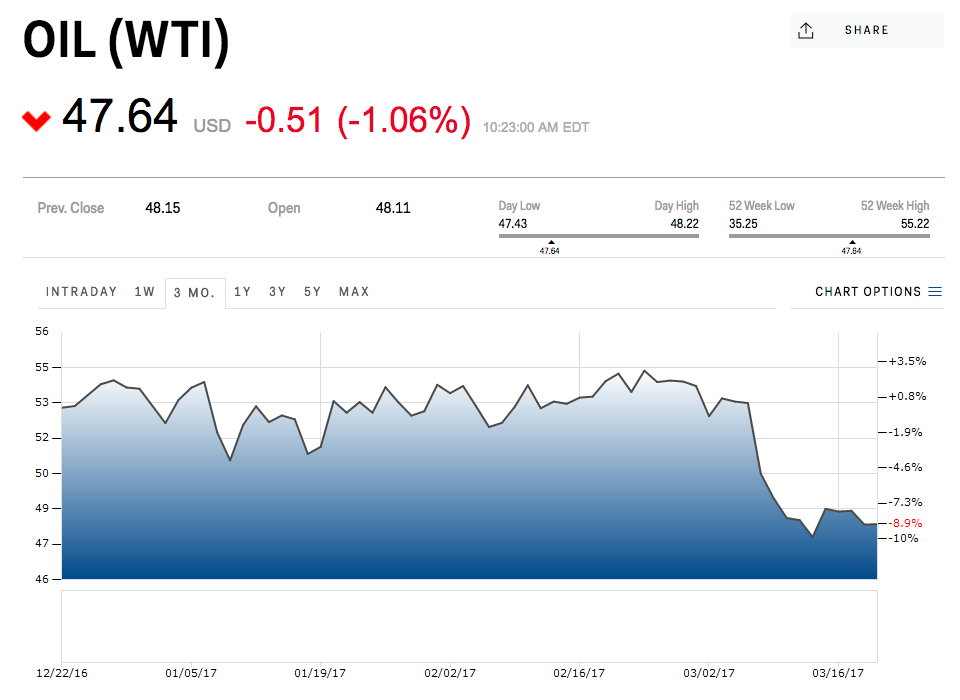 “With U.S. crude stocks continuing to mount into record territory both in total and at Cushing following almost two months of OPEC production restraint, we feel that the odds of a gradual unraveling in the OPEC agreement have been increased significantly,” Jim Ritterbusch, president of Chicago-based energy advisory firm Ritterbusch & Associates, said in a note.

Global benchmark Brent futures for May delivery slipped below $50 per barrel for the first time since November. They were down 84 cents, or 1.7 percent, at $50.09 a barrel by 10:43 a.m. ET. Earlier the contract fell as low as $50.05, its lowest since Nov. 30 when OPEC countries agreed to cut output.

A deal between the Organization of the Petroleum Exporting Countries and some non-OPEC producers to reduce output by 1.8 million barrels per day (bpd) in the first half of 2017 has had little impact on bulging global stockpiles of oil.

OPEC, which sources say is increasingly leaning toward extending cuts, has broadly delivered on pledged reductions so far, but non-OPEC states have yet to cut fully in line with commitments.

“OPEC has used up most of its arsenal of verbal weapons to support the market. One hundred percent compliance by all is the only tool they have left and on that account they are struggling,” said Ole Hansen, head of commodity strategy at Saxo Bank.

U.S. shale oil producers have been adding rigs, pushing up the country’s weekly oil production to about 9.1 million bpd for the week ended March 10, up from an average of 8.9 million bpd for calendar 2016, according to U.S. energy data.

“OPEC’s market intervention has not yet resulted in significant visible inventory drawdowns, and the financial markets have lost patience,” U.S. bank Jefferies said in a note.

But the bank said the market was undersupplied and, if OPEC extended cuts into the second half, inventories would draw down and prices recover above $60 in the fourth quarter.

(Additional reporting by Edmund Blair in London and Henning Gloystein in Singapore; Editing by Dale Hudson and Chizu Nomiyama)