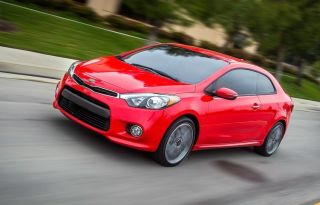 Did you know Kia still made the two-door Forte known as the Koup? I had no idea this was still a thing. Apparently, I was not alone, and since no one really bought them, and Kia is axing the Forte Koup for the 2017 model year.

The first-generation car was a decent looking Scion tC competitor, and had some slick diffusers in the back.

I remember thinking that had potential, but the driving experience and the features didn’t really deliver. Occasionally, you would see these cars modified and wonder why the owner didn’t just buy a Civic Si instead.

Then, apparently, Kia refreshed and updated the poor Koup over the years and models of the car collected dust on dealer lots. According toCarsDirect.com, a Kia representative confirmed that the Koup will be discontinued in 2017. You can’t really blame buyers for ignoring the Kia Koup, as it came with a starting price of almost $20,000 and was easily overshadowed by the much better and cheaper Honda Civic.

Speaking of the Honda, here is a little factoid that will blow your mind. You know the all-new Civic Si, with a 1.5-liter turbo that makes a disappointing 205 horsepower and isn’t even for sale yet? Kia was basically selling the same car since 2014. The Forte Koup SX could be had with a 1.6-liter turbo making 201 HP, a six-speed manual and some nice features for under $22,000.

Now, with dealers desperate to off-load inventory, you can snatch up one of these sporty two-doors for around $15,000. That’s not a bad deal for a younger person on a budget shopping for a brand new car.

Farewell, Forte Koup. Perhaps if your name were spelled correctly, your fate would have been different.

Baja Kia Forte Koup? Hell Yeah, I’m Down With That

The 2017 Kia Niro Will Teach You To Drive Smoother

Tom is a contributing writer for Jalopnik and runs AutomatchConsulting.com.He saves people money and takes the hassle out of buying or leasing a car.