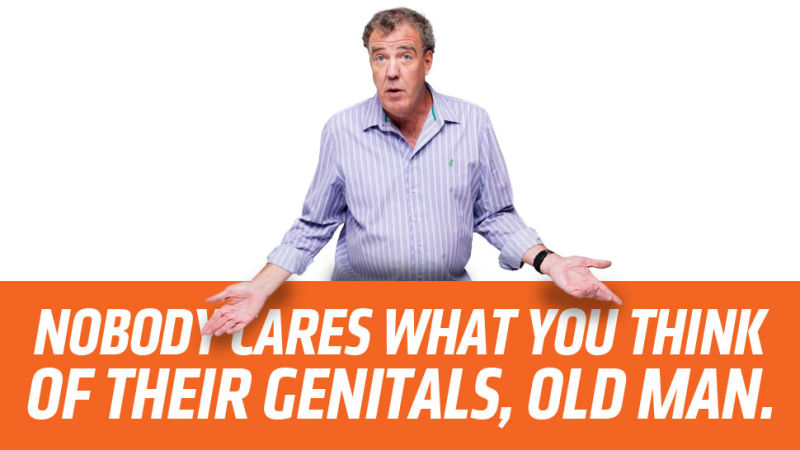 There are people calling on Amazon to fire Jeremy Clarkson before his new car show begins, because Jeremy Clarkson is something of an idiot who’s under the delusion that anyone gives a shit about what he thinks about children’s genitals.

Clarkson, incredibly, does seem to think that his thoughts on the gender identities of people whose genitals he has no legal right to inspect matter. In fact, he thinks they matter so much that he wrote a column for the Sunday Times called Transgender Issues are driving me nuts. I need surgery on my tick boxes.

The column is behind a paywall, and it’s not one I’d suggest you pay for because, come on, why the hell would you possibly give a shit, but:

“As far as I was concerned, men who want to be women were only really to be found on the internet or in the seedier bits of Bangkok. They were called ladyboys, and in my mind they were nothing more than the punchline in a stag night anecdote.”

He also blames parents for “poisoning” the minds of children:

“I wanted to seek out [the parents] and explain that they were free to live a lunatic life, they must not – and I was going to emphasise this with spittle – be allowed to poison the mind of a child…

“[Children] dream impossible dreams. You don’t actually take them seriously. You don’t take them to a hospital when they’re 10 and say, ‘He wants to be a girl, so can you lop his todger off?’”

Of course, these inane statements sparked a lot of controversy, and people are calling on him to be fired.

Don’t get me wrong, I love watching Clarkson do stupid things in cars. He’s great at that, absolutely, and I like hearing him talk about cars. I can safely say, though, never once in my life have I ever looked up from my newspaper as I sat on my veranda, gotten a faraway look in my eyes and wondered “How does Jeremy Clarkson feel about other people’s gender identities?”

I’m not sure if he necessarily needs to be fired from a show about cars, but as far as him being made to look like a jackass, that’s great. Seriously, is there anyone alive who’s opinion about transgender issues matters less than Jeremy Clarkson’s?

It would be like if I wrote a column spouting ignorant, half-assed opinions about some issue in the ornithological world—my opinion just wouldn’t matter.

Except, of course, teenagers aren’t killing themselves over their families not accepting them because of opinions on ornithology. Or if they are, it’s not being reported widely.

Clarkson: shut the fuck up. Do your Amazon show, have fun with cars, and try to revel in the freedom you have. The freedom to have a fantastic job, gobs of money, and the freedom to know that you don’t have to write an insipid column about every ignorant, backwards-assed thing that pops into your head.

It’s great! You can think ridiculous shit about transgendered people all you want, and—pay attention now, because this part is fantastic—you don’t have to labor it into some lavishly stupid column about situations and lives that have absofuckinglutely nothing to do with you!

Think about all the extra time you’ll have to punch faces when you get hungry – you know, like a cartoon ape would – once you realize that nobody gives a shit about your stupid, old-man thoughts.

Except about cars. You can have fun with that.

UPDATE: In the interest of fairness, I’ll include a paragraph that shows a little more of his column, part that shows some sense of sympathy:

But then I thought of something. Let’s just say for a moment that one in 1,000 are transgender. Or one in 100,000. Or even that it’s actually just one. Let’s say that there is one person out there who is a woman living in a man’s body, or the other way around.

I started to imagine what life might be like for the poor soul. It would be dreadful. Absolutely awful. And all they seem to want to make their life better is a third gender option box on official documents. That’s not really the end of the world for everyone else, is it?

He’s not an absolute monster, of course, but by his same logic, why would he care at all what box is ticked by anyone on any form? As far as his idea of a third box, that’s fine, too, I guess. People can identify with whatever gender they want, I don’t care. There’s cars that need driving.