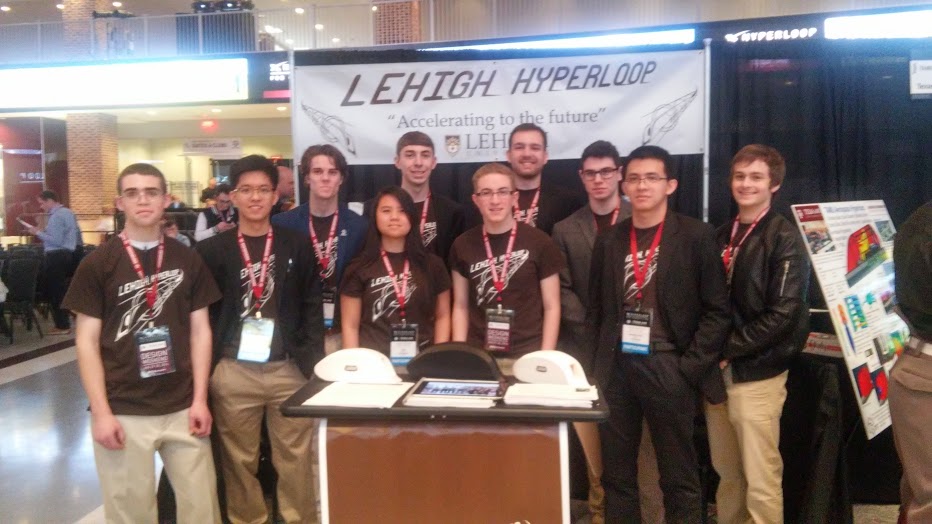 Last weekend over 100 teams headed to Texas A&M for the first official hyperloop pod design competition, organized by Elon Musk and SpaceX. We talked to Seamus Cullinane, the design lead from Lehigh Hyperloop about the event, how he plans to move forward, and the future of the technology.

Jacob Kleinman: You just got back from the first Hyperloop Pod Competition where you placed in the top 10. Congrats! What was that experience like?

Seamus Cullinane: It was pretty amazing going down there. We had to leave on Thursday. Flying down and then we drove three hours. It was quite an ordeal. Once we got down there it was just incredible. Texas A&M stadium was amazing compared to anything we have. It kind of hits you this is happening and this is incredible to see so many people all at once with the same ideas. Before we got there it was just me and 20 other people coming up with a design. Then you get there and there are 120 other schools working.

JK: How was the competition set up?

SC: The way it worked was everyone had their own small booth. There were judges walking around but they weren’t judging at the time. The booths were mostly for sponsors, general public and all the teams checking each other’s designs out. The really important part was a private 20 presentation with the judges and a 10 minute Q&A session. We met with about six judges, mostly space and tesla engineers. That counted for 40 percent of our grade. The other 60 percent was a design brief we had to submit a week earlier.

The entire two days were crazy. It was definitely tiring. You’d work for 12 hours straight just talking about the idea and design, and then at the end of the day you’d go back to the hotel and work on preparing for the next day.

JK: Your hyperloop pod put a special focus on handicap accessibility. What else makes your design unique?

SC: Handicap accessibility was a big separator for us. In terms of the technical design we also took a different approach to our air compressor. One of the main issues when going fast is air resistance. Even though there is less air in the tube then usual—about 60 percent less—the air still builds up and makes it hard to go at super high speeds. To counteract this Elon Musk envisioned some sort of air intake that would power air bearings, making the pod like an air hockey puck. To power the air bearings you need a compressor.

The problem is that at this 40% pressure environment the pod still runs into a lot of air resistance so the compressor isn’t very efficient. Many schools decided to remove the compressor altogether and lower the air pressure in the tube even more to solve the problem. We realized that what we needed wasn’t a bigger or better compressor, but a two stage system. The first stage is a high speed plug fan that has a very high air flow. That can’t power the air bearings on its own, though, since it doesn’t produce a high enough pressure. This is where the compressor comes in. By pulling air from regular air pressure, produced by the plug fan, we don’t need a fancy compressor. This keeps cost down and makes high speeds easier. As far as we know no other team moving forward uses this two stage air intake, and we think it will be the separating factor at the next competition.

In terms of scalability because we are using two relatively inexpensive devices to power our air intake a much larger scale can be achieved by simply buying the larger versions, which don’t need to be special ordered or built specifically for our design.

JK: Are there any aspects of the design that you’re already working to improve?

SC: We’re definitely going to be looking at air dynamics and whatnot. Our guy who’s been working on it thinks he can get it even better. In terms of large changes we hope to maintain 80 to 90 percent of our design. We’re mostly concerned with safety features. Things like making sure the battery doesn’t explode.

JK: Did you get any good feedback from the judges?

SC: Not yet. We just found out last night that they are going to give us two SpaceX engineers to be our team advisers. They’ll tell us what needs to be fixed before we can start building. We still have to submit another brief covering what was wrong with the design, what changed and what needs to be fixed

JK: What about the other teams? Did you get any interesting ideas from walking around the competition.

SC: For sure. We walked around we saw what other people had, and we liked what we had. We definitely learned from the different comparisons, but overall it just made us more confident in our design. One thing we found out is that high speed frictional breaking isn’t going to be allowed because it will destroy the tube. So we’re going to remove that from our design, and instead we’ll include a magnetic breaking system.

JK: MIT’s team won first place at the competition. What did you think of their design?

SC: MIT’s design is very interesting because they use either no electricity or almost no electricity. Instead they’re very reliant on a mechanism designed by SpaceX that will push the pod for the first 100 meters, and then you can glide in. Their pod weighs 250 kg while ours weighs 1000 kg. So they don’t have a compressor, which is very cool.

I have concerns about scalability for their pod, but they said it can scale up. They also don’t have a propulsion system. So if they slow down too fast they’ll get stuck in the tube and they’re going to be done. Their aerodynamics are good because they don’t have space for a passenger, but SpaceX just said you need to leave space for a person to sit and lay down comfortably. That’s going to mess up their aerodynamics. Their pod is tiny compared to ours. Our pod is huge because we have the seat and the person physically sitting there.

JK: So what’s next for you and the rest of the team?

SC: We’re still waiting for official feedback. In the meantime we’re looking for corporate funding. We need help getting the funding to actually build the thing, since the estimated cost is pretty high. As much as Lehigh wants to help they don’t have the money. We need to build a small test track and a frame to start testing our design. It’s one thing to say it works on paper. It’s another to have the parts and physically put them together. No matter what the spec sheet says there’s going to be some variation.

JK: Will you be ready for the official test this summer at SpaceX?

SC: Well, in recent emails they’ve said the track will be ready in less than a year. I could be ready for the summer, or a lot later. Either way we still want to be done by the end of the school year.

JK: Do you think this technology will be functional in the next few years? What’s the hyperloop’s full potential?

SC: I think the first thing it’ll be used for is supply transportation. It’s easier to transport goods than people. People complain.

That could happen within five years. Then once it becomes cheaper and more normal it could easily be adapted for people. Our pod is for people but you could easily take the seat out and ship supplies instead.

JK:What do you think about comments from the CEO of Hyperloop Transportation Technologies that the first working hyperloop probably won’t be in America?

SC: I’m not opposed to it. It’s kind of inevitable. As a nation we put money into our infrastructure, but not as much as China. I wouldn’t be surprised if once the technology is proven they’ll say “Let’s build one.” They need the transportation and they’re spending the money. Once someone can prove it’s feasible and cheaper and quicker than maglev everyone is going to jump onboard. But I’d be surprised if the first full-scale track is built in another country than in the U.S.

I think people are waiting for the technology to be proven. Someone needs to make that jump and do it full-scale. We need to prove you can go from LA to San Francisco in 30 minutes before people start trying it in other countries.

JK: How did you get involved in this project?

SC: I’ve always worked on robotics team and competitions ever since high school. On the first day of school this year our team captain asked if I knew about the SpaceX pod competition. I looked it up and looked at all the white papers that Elon Musk posted and thought “This is incredible.”

I really believe in the idea of the hyperloop and that it can change how we transport ourselves between cities. I’m originally from New Hampshire and if there was a hyperloop it would cut my commute in half going back and forth to school.

Is the hyperloop actually the future? The promise of blazing fast transportation around the country seems closer than ever thanks to the work of Lehigh Hyperloop and other teams that competed at the first SpaceX competition. We’re still years from seeing the technology implemented to move supplies, let alone humans, but by the end of 2016 we should see the first test runs take place as Elon Musk and a few other companies race to make this futuristic dream a reality.