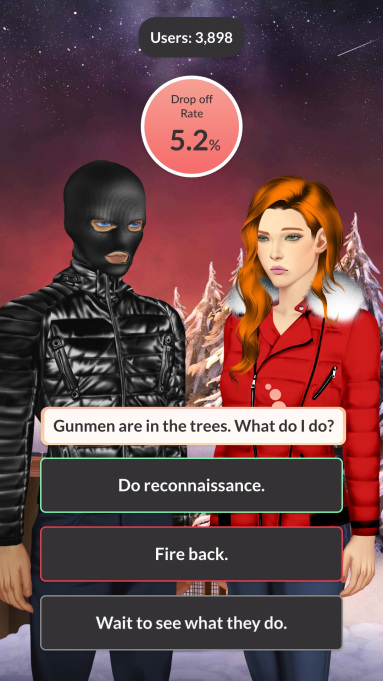 With Dorian, co-founder and CEO Julia Palatovska said she’s hoping to empower fiction writers and other storytellers to create their own games.

Palatskova previously worked in gaming as the head of business development at G5 Entertainment, and she said she’d also become entranced by narrative games and interactive fiction. And while there are existing interactive fiction platforms, she saw “an opportunity that I felt was missing,” particularly in the fact that those platforms are “entirely single player, with no opportunity to play and collaborate with other people.”

So she gave me a quick tour of the Dorian platform, showing me how, without coding, a writer can essentially design characters and backgrounds by choosing from a variety of visual assets (and they’ll eventually be able to upload assets of their own), while using a flowchart-style interface to allow the writer to connect different scenes in the story and create player choices. And as Palatskova noted, you can also collaborate on a story in real-time with other writers.

“In terms of writer productivity, I would say there is almost no difference between creating interactive fiction on our engine and just writing fiction,” she said. 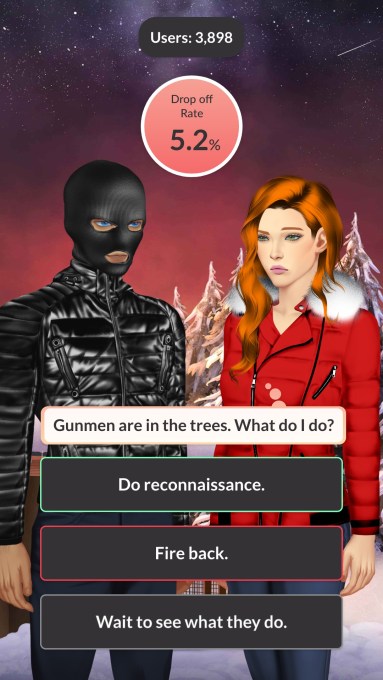 From what I could see, the resulting games look similar to what you’d find on platforms like Pocket Gems’ Episode, where there aren’t a lot of technical bells and whistles, so the story, dialogue and character choices move to the forefront.

When I brought up the open-source game creation software Twine, Palatskova said Twine is “just a tool.”

“We want to be more like Roblox, both the tools and the distribution,” she said.

In other words, writers use Dorian to create interactive stories, but they also publish those stories using the Dorian app. (The writer still owns the resulting intellectual property.) Palatskova noted that Dorian also provides detailed analytics on how readers are responding, which is helpful not just for creating stories, but also for monetizing via premium story choices.

In fact, Dorian says that in early tests involving around 50,000 players, writers were able to improve monetization by 70% after only one or two iterations. And Palatskova noted that with Dorian’s games — unlike an interactive film such as “Black Mirror: Bandersnatch” —”It’s fast and easy to test multiple branches.”

Dorian is currently invite-only, but the plan is to launch more broadly later this year. Palatskova is recruiting writers with and without gaming experience, but she also expects plenty of successful contributions to come from complete novices. She wants Dorian to be “a completely open platform, like Roblox or Twitch for writers.”

“Dorian’s success in creating an interactive platform that values storytelling while prioritizing monetization for its writers is a game-changer,” said March Capital’s Gregory Milken in a statement. “Julia and her team are creating a community that is primed to capture the attention of today’s influential but underrepresented audiences of diverse content creators.”