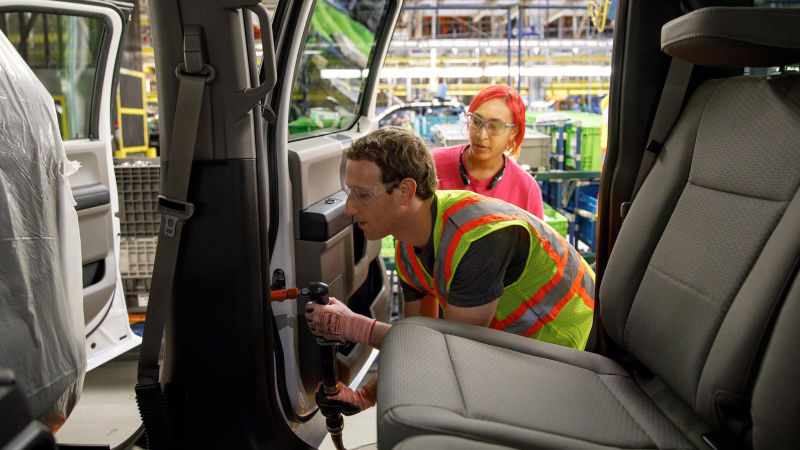 Facebook co-founder and gajillionaire Mark Zuckerberg visited the Ford Rouge plant outside of Detroit today and helped build some Ford F-150s. It was his first (first!) time in Michigan. Zuck is truly a man of the people.

As part of a personal “Year of Travel Challenge,” Zuckerberg went to Michigan and wanted to meet Ford employees to see how they’re incorporating innovation and new technology into their work, reports The Detroit News.

And the trip went well enough for him to update his Facebook status and include a few pictures:

It’s my first time in Michigan, and my first stop was at the Ford Rouge Plant outside Detroit.

I played a very small part in assembling some new Ford F-150s on the line by adding antennas, cleats and drilling screws. I even signed the inspection sticker on one. You’re welcome, future F-150 owner.

But the most interesting part was sitting down with some of the people who do this every day.

Working on the line at an assembly plant is physically hard, and the people I met talked about how tiring it is and how worn down you get. Each person told me separately how important it is to have good shoes because you’re essentially walking on a treadmill for 10 hours a day. Every 52 seconds, you have to go through your set of tasks — 650 times a day. You have to be perfect, but the biggest challenge is having the focus to do the same thing over and over again. The people I met are so good they keep the line running at full speed and listen to audio books or music in one earbud to stay engaged.

Working at Ford is a long term thing. Most of the workers I met had been at the plant for at least a decade, and a lot of them have kids and friends who work there, too. Someone told me that when you spend 11 hours a day, four days a week together, you end up becoming family and friends outside of work, too.

Thanks to Bill Ford and everyone I met for having me. And thanks to the line workers who checked my work 🙂

Here’s a photo of him signing stuff, so it looks like a future Ford F-150 owner out there is getting a Mark Zuckerberg-autographed product. I can’t imagine a greater honor.

It seemed like a really swell day. Zuck appeared to be in a way better mood than he was the day that rocket exploded.