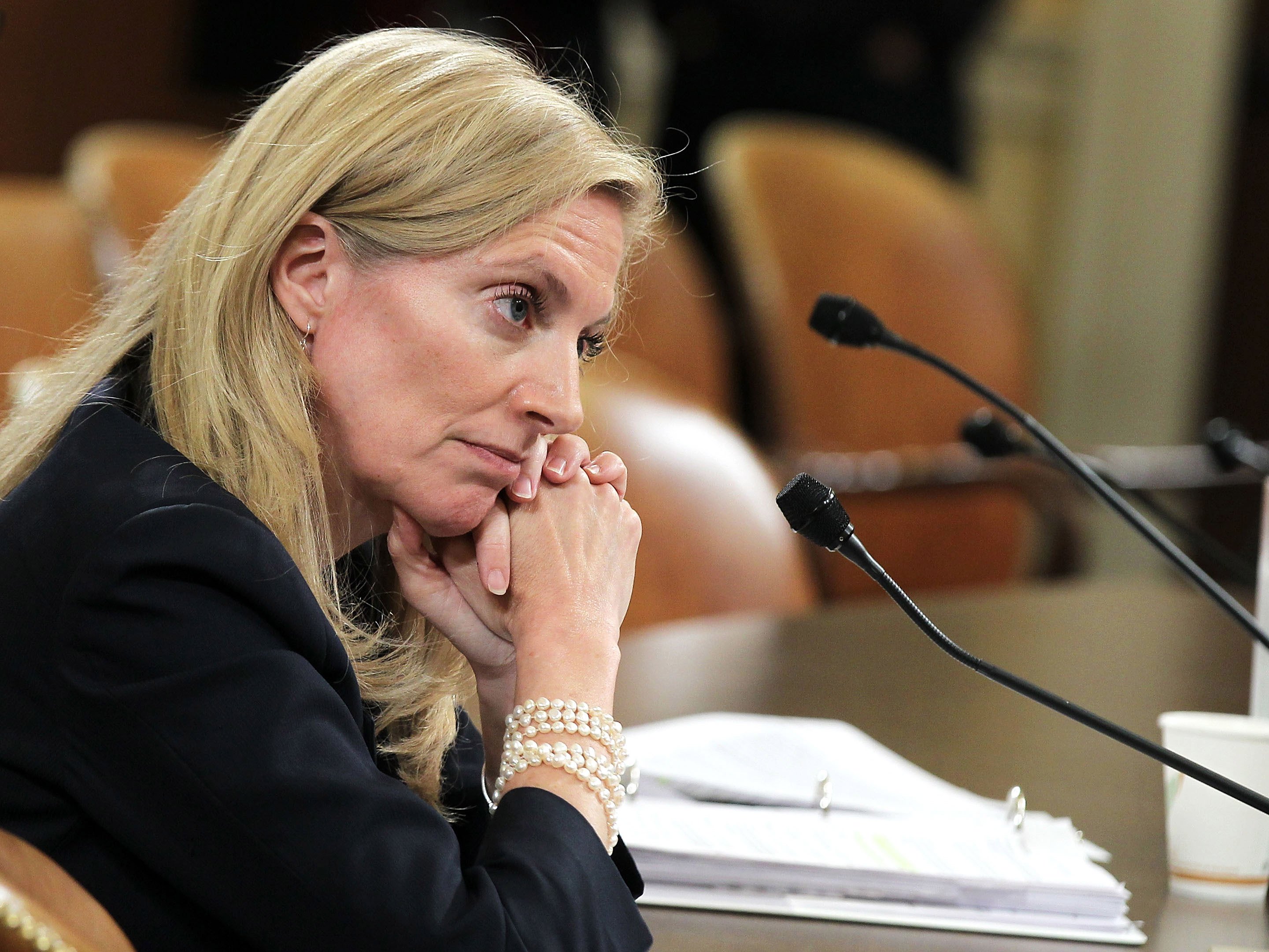 Goldman Sachs has a scary warning for the bond market

In a speech Monday, Federal Reserve Governor Lael Brainard admitted there is a liquidity issue in the bond market and that regulation may be a part of the problem.

But, she argued, this regulation is also preventing another 2008-style banking collapse.

Which is simply more important.

The issue of bond market liquidity has been a consistent theme over the past years or so with financial executives such as JP Morgan CEO Jamie Dimon, Blackstone CEO Steve Schwarzman, and Oaktree Capital’s Howard Marks weighing in on the issue and generally pointing the finger at a lack of liquidity exasperating moves in financial markets.

Some of the blame has been pointed at federal regulations that force banks to have more cash on hand.

Brainard recognized that there are some liquidity strains, especially in the high-yield bond market, but these are worth the increased security offered by banks’ holding fewer risky assets.

“While acknowledging the role of regulation as a possible contributor, it is important to recognize that this regulation was designed to reduce the concentration of liquidity risk on the balance sheets of the large, interconnected banking organizations that proved to be a major amplifier of financial instability at the height of the crisis,” said Brainard.

Brainard conceded that, “there may be some deterioration in the resilience of liquidity at times of stress, along with a greater incidence of outsized intraday price movements,” adding that, “Relatedly, liquidity appears to be more segmented based on the characteristics of the securities being traded and the underlying structure of the markets in which they are traded.”

And so essentially Brainard is allowing that regulations have probably caused some decline in liquidity conditions in markets, but the impacts are being felt by smaller investors rather than by large, systemically-important banks. (Recall that banks themselves were the ultimate bagholders on many mortgages that went south in the run-up to the financial crisis.)

This, in turn, reduces the likelihood of contagion to the broader economy.

In addition to raising uncertainty around the outlook, the recent financial market volatility has underscored the importance of ongoing attention to the resilience of market liquidity. Although it is fair to say that the recent uptick in volatility has in part reduced earlier concerns about prolonged low volatility and associated reach-for-yield behavior, it has placed added focus on the resilience of liquidity, particularly in markets, such as the market for corporate bonds, that may be prone to gapping between liquidity demand and supply in stressed conditions.

The Federal Reserve’s surveillance of liquidity conditions in financial markets has broadened and deepened considerably since the “taper tantrum” in mid-2013 and the events of October 2014 in the Treasury market. The analysis so far suggests a few preliminary observations. While it does not appear that day-to-day liquidity has declined notably, some characteristics of liquidity provision are changing. Broadly, traditional price-based measures of liquidity such as bid-asked spreads and the price effect of a given trade size generally remain in line with pre-crisis norms in most markets. In contrast, both anecdotes from market participants and the declining size of trades in some markets suggest it may have become more expensive to conduct, and may take more time to implement, large trades.

Moreover, there may be some deterioration in the resilience of liquidity at times of stress, along with a greater incidence of outsized intraday price movements. Relatedly, liquidity appears to be more segmented based on the characteristics of the securities being traded and the underlying structure of the markets in which they are traded. Based on granular disaggregation of the traded securities, liquidity appears little changed in secondary markets that have traditionally been highly liquid, such as on-the-run Treasury bonds and highly rated corporate bonds. By contrast, there has been some reduction in liquidity in the segments of these markets that have historically been less liquid.

The move toward somewhat greater segmentation of liquidity, in conjunction with ongoing electronification and acceleration of trade execution, might be contributing to increased linkages across markets. Anecdotally, it appears market participants may be using relatively more liquid instruments to hedge exposures in other less liquid market segments, perhaps unintentionally contributing to increased correlation across markets.

From a broader financial stability perspective, the possible deterioration in the resilience of liquidity suggests a special focus on segments where price gaps are most likely to arise at times of stress between holders of relatively illiquid or thinly traded securities that want to sell and dealers with an apparently reduced willingness to take the other side of the trade, as indicated, for example, by leaner dealer inventory holdings.Mutual funds holding relatively less liquid assets is one area of focus. Despite having share prices that move with market prices, these funds can give rise to first-mover advantages for redeeming shareholders and create the potential for destabilizing waves of redemptions and asset fire sales if liquidity buffers and other tools to manage liquidity risk prove insufficient.In this regard, our surveillance has been closely monitoring for any signs of liquidity strains associated with the recent increases in spreads for high-yield corporate bonds, as well as for idiosyncratic events affecting particular funds in this segment, such as the events surrounding the abrupt closing of Third Avenue Management’s Focused Credit Fund last December.

More broadly, the regulatory agencies in the United States and the Financial Stability Board internationally have work under way focusing on possible fire-sale risk associated with the growing share of less liquid bonds held in asset management portfolios on behalf of investors who may be counting on same-day redemption when valuations fall. The recent proposal by the Securities and Exchange Commission (SEC) to ensure mutual funds have ample liquidity buffers under stressed scenarios and undertake measures to address the risk of heavy redemptions and fire sales is notable in this regard. Our surveillance will continue to undertake more granular analysis of liquidity resilience and associated risks.

Across financial markets, it is difficult to disentangle the effects on liquidity of changes in technology and market structure and changes in broker-dealer risk-management practices in the wake of the crisis on the one hand and enhanced regulation on the other. While the leverage ratio and other Dodd-Frank Act requirements likely are encouraging broker-dealers to be more rigorous about risk management in allocating balance sheet capacity to certain trading activities, the growing presence of proprietary firms using algorithmic trading in many of these markets, which predated the crisis, is also influencing trading dynamics in important ways. The Request for Information issued by the U.S. Treasury and the recent proposals from the Commodity Futures Trading Commission and the SEC will be important in deepening our understanding. While acknowledging the role of regulation as a possible contributor, it is important to recognize that this regulation was designed to reduce the concentration of liquidity risk on the balance sheets of the large, interconnected banking organizations that proved to be a major amplifier of financial instability at the height of the crisis.

SEE ALSO:Hedge funds have been getting crushed, and it is hurting everyone else in the market