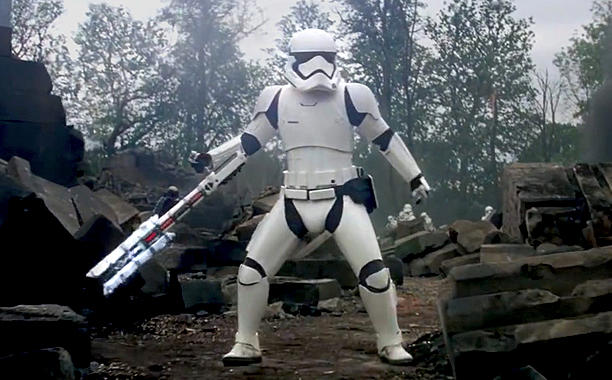 Even in the throes of CES, the tech industry’s annual beauty pageant, we still managed to keep track of the biggest entertainment stories you need to know about. Like, for example, that one anonymous Reddit user claiming to have seen an early preview of Batman v Superman. Or Disney acknowledging the public’s fanatical reaction to the twirling Stormtrooper in The Force Awakens.

Really, the story about the twirling Stormtrooper is one of the funnier to crop up in a while; his legendary status as suddenly risen to Boba Fett levels. We thought he was just another nameless extra who would be known for shouting “Traitor!” at Finn, but turns out the character has a complete backstory.

There were a ton of other big stories, so get yourself caught up below.

This one is from last week, but it was too juicy to pass up. Apparently Warner Bros. held a surprise test screening for some unsuspecting moviegoers, and one user broke the NDA to tell Reddit all about it. I won’t talk about any of the details here, but suffice it to say that the anonymous Reddit user really, really enjoyed the film. Oh, and the spoiler-sport said what’s revealed in the trailers is only a small part of what audiences will see when the film hits in March. [Reddit]

Netflix announced that Special Correspondents, a film starring Rickey Gervais and Eric Bana, will hit the service on April 29. The Netflix original will follow a New York based radio journalist whose extravagant lifestyle derails his career. Netflix has been trailblazing a path toward its goal of becoming a global TV network, and Special Correspondents will further establish the service as a streaming powerhouse.

The first teaser trailer for The Conjuring 2 has been released, and it’s incredibly creepy. If you’re scared easily, I would highly recommend skipping this one. If you’re anything like me, however, you’ll get a morbid thrill out of this macabre ghost story, which follows a couple as they investigate paranormal activity in north London. It gives me the creeps just thinking about it.

Netflix is on a bit of a tear this week. After releasing a teaser for Daredevil season 2, the service has unveiled a handful of images from Fuller House, which is debuting on Netflix on Feb. 26. It looks really odd seeing (most) of the Tanner family back together, but I know many people can’t wait to see how this one plays out.

At this point we can assume Guillermo del Toro is attached to just about every project out there. A new report claims the director is attached to remake the 1966 science fiction classic Fantastic Voyage, an adventure tale about a submarine crew that shrinks to microscopic size and ventures into the body of a scientist. It seems like a great fit, but who knows if the project will ever get off the ground. [HR]

The script for Star Wars: The Force Awakens has been released to the Writers Guild of America for award consideration, and /Film has managed to obtain a copy. In it, possible details about Episode VIII are revealed, including a suggestion that Luke Skywalker knows who Rey is, and might even be a little worried about her presence at his secret hideout (on a planet apparently known as Ahch-To). [SlashFilm]

Making Star Wars has a few different details about Rogue One. First, the site claims the name for the character played by Felicity Jones will be Lysa Erso. So, um, yeah. Meanwhile, Making Star Wars also claims that a story trailer for the film will be attached to Captain America: Civil War, which seems like a good place to drop it. No doubt it’ll be available to see online around the same time. [MakingStarWars]

TNT president Kevin Reilly has confirmed that its long-in-production live-action Teen Titans show is dead. The show had been in production limbo for a while now, with no updates to speak of. Reilly said the network didn’t want to head in that direction, which is a bummer for fans of the Titans. [TVLine]

The Get Down sizzle reel released

Netflix has released a sizzle reel for Baz Lurhman’s The Get Down, and it looks damn good. I had no real intention of watching the show (mostly because I knew nothing about it), but having seen this footage, I’m going to check it out on day one for sure.

Told through the live and music of a ragtag crew of South Bronx teens, The Get Down is a mythic saga of the transformation of 1970s New York City.

Although he was onscreen for what, 30 seconds, people have really taken to that anonymous Stormtrooper who fights with Finn on Takodana. Turns out he actually has a name: FN-2199. This character was apparently one of Finn’s buddies in training, which is why he angrily shouts “Traitor!” at Finn before they start duking it out. [EW]