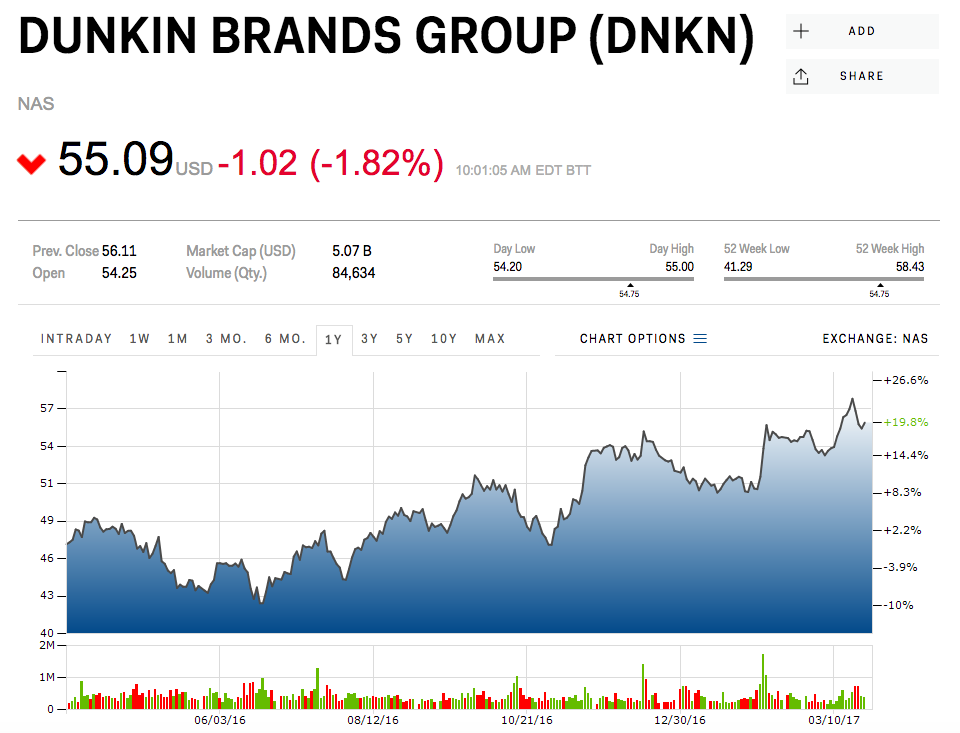 The drop follows Goldman Sachs analyst Karen Holthouse’s downgrade of the parent company of Dunkin Donuts to a “Sell” from a “Neutral” rating and lowering of her price target to $47 from $48.

Holthouse believes that Dunkin could drop for three reasons:

The analyst notes that the two big winter storms in the Northeast United States disproportionally affected Dunkin because 55% of the donut chain’s locations are in the Northeast, compared to the industry average of 20%.

Meanwhile, McDonalds and 7-Eleven are chomping away at Dunkin’s market share. According to Goldman:

“MCD launched a national McCafe value promotion in January ($1 any size coffee and $2 specialty drinks). This is a substantial discount to DNKN’s pricing, and search trends show an ongoing benefit to consumer interest in MCD for coffee…

“In late February, 7-11 also started running a free any size coffee with the purchase of a breakfast sandwich promo. This not only represents an additional competitive threat, but it could have initially been rolled out as 7-11’s response to the McDonald’s promo (7-11’s small coffee prices start around ~$1.30).”

Growth has been slowing for the company as well. Dunkin has been focusing on digital efforts including perks, mobile order, and mobile pay. Unfortunately, customers are not impressed with the technology and unique visitor growth is down.

Early excitement about Dunkin expanding to the West Coast of the US and other markets has been tempered. According to Goldman, new unit growth looks like it’s going to be at the lower bound of Dunkin’s 4-6% guidance:

Same-store sales growth is projected to be lower than 2% through 2018, a weak number for any chain.

For these reasons, Goldman thinks that Dunkin’s price-to-earnings multiple will contract to 12.5x EV/EBITDA from its current multiple around 15x.

According to Goldman’s analysis, Dunkin could drop 16% from its closing price of $56.11 on March 28.