Goldman Sachs has good and not-so-good news about the future of the stock market.

The good news is that the risks of a bear market — technically defined as an S&P 500 drop of at least 20% — are fading away, according to Peter Oppenheimer, the firm’s chief global equity strategist.

But going forward, he says investors should not expect to earn the quality of returns the market has delivered this year. The S&P 500 has gained more than 25% in 2019 and is on pace to outperform every calendar year except one since 2009.

Oppenheimer addressed the risks in a recent note to clients against the backdrop of a phenomenal year in the ongoing bull market and the economy’s record-long expansion. He also unveiled an addition to the variables that go into Goldman Sachs’ bear market risk indicator.

When the indicator was first compiled it in 2017, Oppenheimer and his colleagues examined more than 40 variables and grouped them as either macroeconomic data, market-based indicators, and technical indicators.

They then set a threshold level for each one, and observed how each performed in the lead up to bear markets. Every variable that made the cut met or exceeded its threshold at least 60% of the time prior to bear markets since 1960.

They applied their own judgments in some cases and relied strictly on the data in others to whittle the variables down from 40 to the most significant six.

Here they are, starting with the one that was just introduced:

1. Private sector financial balance: This refers to total household spending less total income. The logic is that when people are using debt to spend more much more than they are earning, they create a private-sector deficit and put financial stability at risk.

Goldman’s economists have found this balance to be a catch-all gauge of overspending in the private sector and an empirical predictor of recessions about 24 months out.

2. Unemployment: They found that periods of both low unemployment and a high Shiller price-to-earnings ratio tend to be followed by negative stock-market returns.

3. Inflation: This variable tends to be associated with excessively tight monetary policy, since the Federal Reserve usually hikes interest rates to try and contain inflation.

4.The yield curve: Many bear markets are preceded by flat or inverted yield curves. Goldman finds that the 0-to-6-quarter forward spread — the gap between the current fed funds rate and the expected rate six quarters ahead — serves as a useful bear market indicator.

5. ISM at a high: Very high levels of indicators such as the Institute for Supply Management’s manufacturing index are usually followed by lower market returns once they start to slow.

6. Valuation: While high valuations are rarely the sole trigger for bear markets, they usually combine with other fundamental factors to raise the risk of a market drop.

The indicator currently shows the risk of a bear market is fading and currently stands at 61%. Although this risk is fading, Oppenheimer doesn’t expect the bull market to accelerate from here. 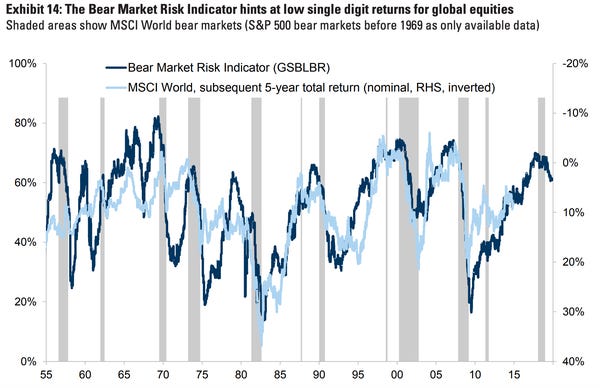 “We would normally expect to see such an acceleration only when the indicator falls to very low levels (sub 40%) — although downside risks are constrained by the ongoing low level of interest rates and recession risks,” he said.

Oppenheimer added: “But, at the same time, the prospects for relatively low profit growth through 2020 and 2021 should limit the upside for equities. Our profit growth forecasts are for single digit growth, on average, over the next couple of years, and the absence of further rate cuts and lower yields suggests that valuations are likely to be close to peak.”

The biggest downside risk for 2020 — and one that is not captured by the bear market indicator — is an election result that pushes down stocks, Oppenheimer said.

And so with lower returns on the horizon, what’s an investor to do? Goldman offered the following investing advice: