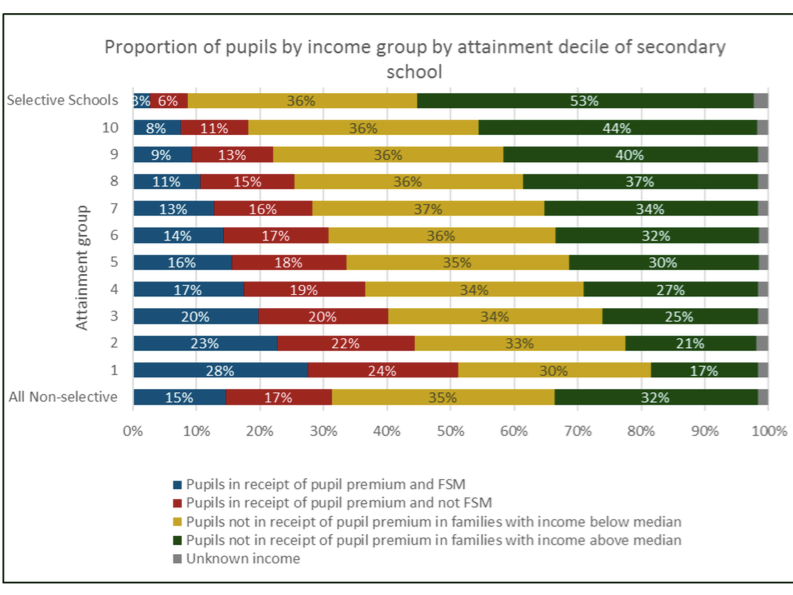 As the government’s own consultation on reintroducing grammars nationwide admits, in January 2016, just 2.5% of pupils in grammars were eligible for free school meals, compared to 13.2% for all state-funded schools.

The fact that selective schools effectively exclude children from poorer families can be seen clearly in the Department of Education’s own charts, released to try to justify the policy.

As the graphic below illustrates, children from low-income families make up a very small proportion of pupils currently in selective schools. All of the evidence shows that in areas which still have grammar schools, they are dominated by the middle and upper classes, with successful applicants to the schools routinely using paid tuition in order to pass the ’11-plus’ entrance exam.

The government knows this. The education secretary Justine Greening knows this. There is simply no way to argue that grammar schools improve social mobility without ignoring the statistics and relying solely on anecdotes.

Greening has a solution to this problem — simply ignore the poorest children.

In her speech today she will instead seek to claim that a new wave of grammars will help children from “ordinary working families.”

Yet, as Greening herself admitted in several interviews today, her new definition of “ordinary” families specifically excludes children on free school meals and the pupil premium.

Under this new definition, families earning up to £33,000 a year will be classed as “ordinary”, but those qualifying for free school meals will not.

It is only by fixing the statistics in this way that she can even come close to getting around the fact that selective schools favour the better off.

As shadow education secretary Angel Rayner said today: “This is a classic case of policy-based evidence making. If your kids get free school meals or qualify for the pupil premium, the government doesn’t think you’re an ‘ordinary working family’.”

And as the Liberal Democrat leader Tim Farron puts it: “The government are fiddling the figures, pure and simple.”