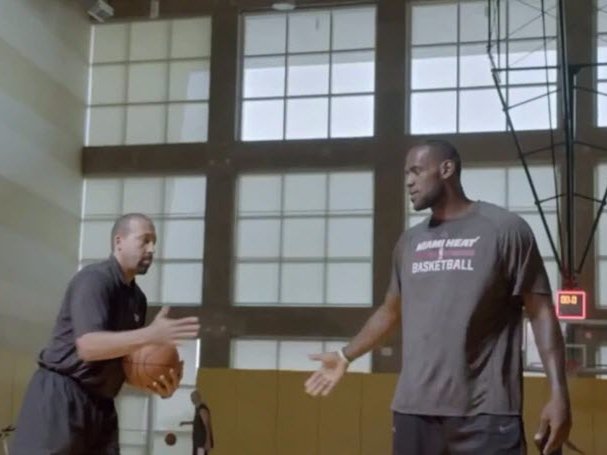 David Fizdale in a Samsung commercial with LeBron James.SamsungUSA

LeBron James may be the best basketball player in the world with a reputation for meddling in personnel decisions, but according to Memphis Grizzlies head coach David Fizdale, he also goes out of his way to show how much he cares about those he works with.

Fizdale recently became a household name in the sports world when he went on a postgame rant about the officiating during the Grizzlies’ playoff series loss to the San Antonio Spurs in which he famously yelled, “Take that for data!”

But before that, Fizdale was an assistant coach with the Miami Heat for eight seasons, helping LeBron and company win two championships.

Fizdale was recently a guest on ESPN’s “Mike & Mike,” and he was asked about working with James. He said James behind closed doors was much different than the businessman who has molded a brand for the world to see.

According to Fizdale, the James most don’t see “is personal.”

“He cares,” Fizdale said. “He really cares about the 15th guy on the bench. He cared about us as coaches.”

Fizdale then told a story about the unusual wedding gift he received from James, one that took a lot more thought and effort than picking something off a registry: a spot in a Samsung commercial.

“I don’t know how many times I came into the office and there was a gift on our desk from LeBron because he’d get so much free crap. I never got so many Christmas gifts in my life. He would do stuff like that for no reason. That was the part I will always remember about him, the things he would do for us.

“He put me in a commercial once as a wedding gift. How about that? Because I said, ‘Don’t get me anything.’ Instead of him listening, he says, ‘Hey, coach, why don’t you be in the Samsung commercial with me?’ You know, that’s a nice little check for an assistant coach. And [the card] says, ‘Hey, man, congratulations on your wedding.'”

Here’s Fizdale’s in the commercial:

And here’s the full commercial: