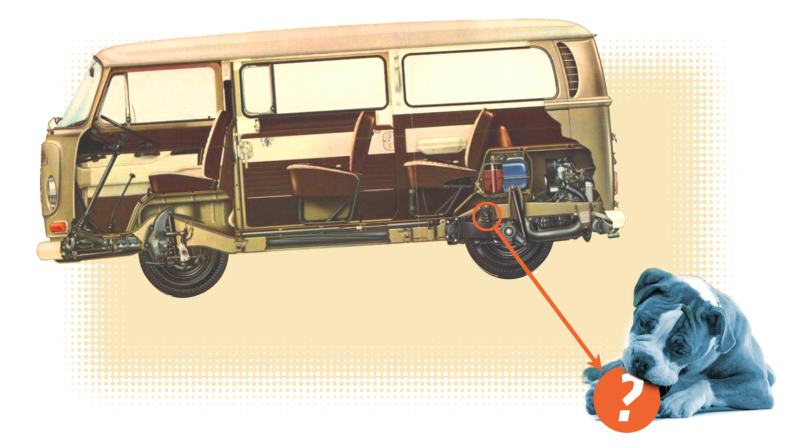 Sometimes, you find out some fact, and immediately you feel years and years of suspicions justified. The fact I’m thinking of involves some of my favorite things ever: air-cooled Volkswagens, dogs, and the act of chewing rubbery things. I can’t believe I never knew this, delightful fact, just hiding there in plain sight.

The dog toy in question is the well-loved Kong, which looks a bit like a cross between a sex toy and an alien’s proboscis. But the Kong also heavily resembles some car parts, specifically VW car parts.

I’ve always thought they had an uncanny resemblance to an air-cooled VW rubber shift boot, but it turns out the actual inspiration is a little more hidden. Here’s the Kong origin story from their own website:

KONG founder, Joe Markham, loved his trained police dog, Fritz, but did not love his destructive chewing habits. Where other dogs might have chewed your shoes or favorite purse, Fritz loved to crunch on rocks, sticks and other harmful items. Fritz’s teeth were wearing down and his need for stimulation and play was not being met, and Joe was frustrated.

One day, while working on a VW Bus, Joe began throwing out car parts to Fritz to lure him away from those rocks. Fritz was immediately taken with a rubber suspension part and dropped it in Joe’s lap to play. The erratic bounce and toughness of the rubber inspired Joe.

Just look at the VW parts themselves next to a couple of Kongs:

Yep, no question. One of the most popular dog toys of all time was originally designed to make a torsion-bar suspension on a light, rear-engined van a bit less jarring.

(Thanks for wising me up, Mark!)

Quick Question: What’s The Most Satisfying Car Part To Bite?

In Memory Of Two Dogs And A Car

Would You Rather: Free Cars And Dead Dogs Edition