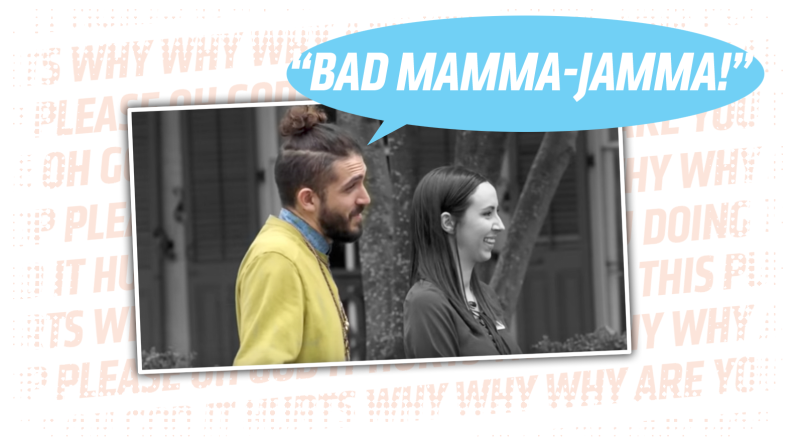 Seriously, Chevy(’s ad agency), what the fuck are you doing? Can’t you see what’s happening? Can’t you see you’re tearing us apart? This isn’t selling any cars; this is selling out or very humanity. Yes, dammit, I’m talking about the “bad mamma-jamma” guy at the end of this godawful “Real People” Chevy Equinox ad.

Since you clicked on this story at all, you must like pain, so go ahead and watch this miserable cringefest all the way up until 0:55 in, when Chevy displays the “real person” they found who’s willing to wear a man-bun and call a Chevy Equinox a “bad mamma-jamma” without swallowing a fistful of horse tranquilizers immediately afterwards:

Chevy GM Chevrolet, why why why do you do this to us? It’s bad enough hearing all these poor and poorly-compensated amiable dipshits tell us that the Equinox doesn’t look “overbearing” and marvel that it has all-wheel drive and “looks like it can go… off-roading?”

I’m sure all of these people are wonderful human beings in any other context of their lives, but there’s clearly something about the entire Chevrolet Real People ad-making process that can turn anyone into an idiot.

Normally, it’s a fairly mild idiocy, like the guy who waves his hand over the center of the dash and proclaims “this part’s awesome,” but sometimes this unholy advertising alchemy can turn what I’m sure was a decent enough human into a yellow-sweatered bowel-irritant-monster that, when asked for an opinion about a pretty anonymous crossover, utters the words “bad mamma-jamma.”

I’m not even entirely sure why this bothers me so much. I say stupid things pretty much every time I’m in public, but putting myself in this guy’s shoes (which appear to be some loafers the approximate color of forgotten cold cuts) and imagining I said those words fills me with a deep, existential dread.

There’s something just so inane and pandering about it; I wouldn’t have guessed it’d be possible to make a commercial like this sound any more insincere and cloying, but damned if Captain Tired Hipster Cliché didn’t find a way.

I know it’s just a commercial, but it’s still terrible, and I just can’t bring myself to believe Chevy sells cars with this shit. Your situation would have to be such that you were nothing more than a voice coming out of a discarded Arby’s bag before you looked at Bad Mamma Jamma guy and thought “fuck yeah, I want to be more like that.”

Just to cleanse your collective brain-palates, here’s the only context where ‘Bad Mamma Jamma’ makes any sense, and it’s sure as fuck not a goddamn Chevy Fucking Equinox: