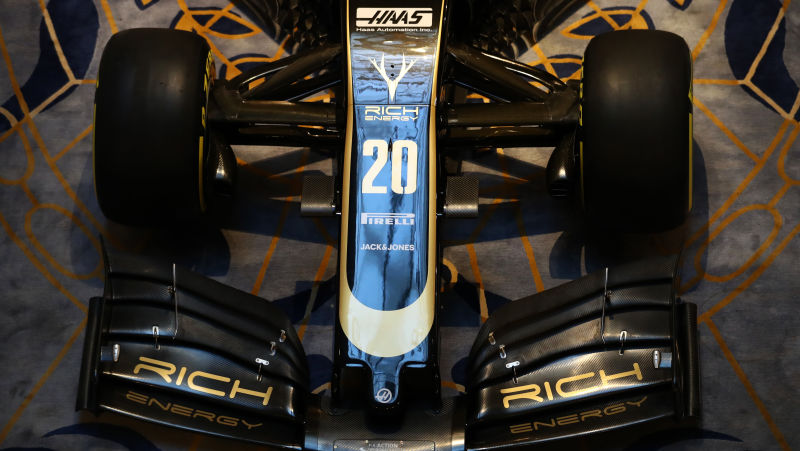 Rich Energy, the mystery sponsor of the HaasFormula One Team that only gets more mysterious with further research, became the subject of a recent copyright claim when British company Whyte Bikes noticed their logos looked oddly similar. In a scathing judgement this month, Rich Energy lost the case.

Rich Energy didn’t simply lose the case, though. The judge wrote a blistering description of how it went down from her point of view, saying she found some of Rich Energy CEO William Storey’s evidence to be “incorrect or misleading,” and that he was “involved in the manufacture of documents during the course of litigation to provide additional support for the Defendants’ case.”

That, of course, is just the tight summary.

Whyte Bikes announced the result of the case Tuesday, linking to a judgement from Judge Melissa Clarke of the Business and Property Courts of England and Wales that concerns the Rich Energy logo on its products, website, advertising and sponsorship of the Haas team. The judge, essentially, concluded that while there was “no direct evidence” that Storey or the logo’s designer, Sean Kelly, saw Whyte Bikes’ logo during the design process, the logo qualifies as copyright infringement.

Storey, when asked for comment by Jalopnik, said Rich Energy intends to appeal the judgement and that the company is “focused on growing the business and this will not impact that one bit.”

“We are disappointed with the judgment as we felt the evidence strongly supported us and I know we designed independently,” Storey wrote via email. “Unfortunately any case like this is about an opinion of a third party.”

The logos are “strikingly similar,” the judge ruled. This goes against what Rich Energy claimed, that its logo is an independent design meant to reflect a modern take on the deer that live in a park in the English town of Richmond, where Rich Energy derives its name. That is, of course, the Rich Energy that is rebranded under Storey’s name. It’s complicated. A comparison of the two can be seen below:

The result of that conclusion, according to the judgement, is that Whyte Bikes will get a choice between damages and injunctive relief for the infringement—forcing Rich Energy to stop using its current logo, presumably—or “an account of profits at its election.” Jalopnik has reached out to Whyte Bikes to ask what its official choice will be, and will update this story when we hear back.

The judgement, however, said the company sought, among other things, “an injunction which would require the removal of the logo … from the Formula 1 race car and website of the Rich Energy Haas Formula 1 motor racing team” with the claim. Jalopnik has asked the Haas team for comment, and will, again, update this story if we hear back.

But the copyright judgement is far from the most interesting part of it all—it was Judge Clarke’s description of how the case went.

The judgement said that while Judge Clarke found Whyte Bikes’ two witnesses to be “straightforward, credible and reliable witnesses” who assisted the court “to the best of their abilities,” she found Storey and Kelly to be “poor witnesses” and had concerns about their credibility—citing that she found there to be conflicting and inconsistent evidence from the defense, as well as what she determined to be “manufactured documentation.”

That manufactured document was created in 2018, according to the judgement, which was presented as a document “compiling together previously existing documents, created by or in the possession of [Staxoweb Limited, Kelly’s digital agency] before the time the Brand Document was put together.”

But here’s what Judge Clarke found via the judgement, emphasis ours:

In fact, Mr Kelly’s oral evidence at trial was that the Brand Document was no such thing. In cross-examination, he said that apart from the pencil drawings High Court Approved Judgment: ATB Sales Limited v Rich Energy Limited and Ors on pages 6-18 which dated from June 2015, and all of the renderings on pages 19-22 which dated from on or around 2 July 2015, the rest of the Brand Document was:

“produced…to try and aid the court to see, to put together the pieces, because the only originals we had were the original sketches and the black geometric designs, and obviously the can design, but those are the only originals. So just to aid, you know, our recollection of those events, we decided to put together a comparison document, which kind of pieces it together, so that we could talk about it more easily”.

The brand document, the judge wrote, “significantly undermined” her view of Kelly and Storey’s credibility.

Judge Clarke also said the defendants’ evidence of independent design was, at best, “confused and contradictory and purports to be supported by documents which are not what they seem,” and that they showed an “unreasonable unwillingness … to even countenance the possibility that they might have seen, but forgotten” the Whyte Bikes logo.

Here’s an excerpt from the judgement, emphasis ours, with “C” relating to the Whyte Bikes logo and “D1” referring to the one for Rich Energy:

In my judgment, there are two possibilities. The first is that Mr Kelly and Mr Storey are lying: they were familiar with C’s Device, and deliberately copied it to produce D1’s Device, making minor changes either to meet Mr Storey’s aesthetic preferences or to ensure the copy was not a facsimile of C’s Device. The second is that Mr Kelly and Mr Storey are telling the truth: they do not remember seeing C’s Device and have no familiarity with it, and did not copy it either knowingly or subconsciously, but created the misleading Brand Research document, the fake vector lines on the render and gave misleading evidence in order to support an evidentially weak, but otherwise truthful case of independent creation. […]

The fact that, as I have found, it was Mr Storey who was doing the bulk of the internet searching, and sharing “hundreds” of logos with Mr Kelly, I consider is significant, particularly in light of the Brand Document produced several years later which still sought to represent as a ‘possible starting point’ the logos of other companies. I infer from that that Mr Storey was looking for inspiration from existing logos, rather than relying on Mr Kelly to do his job and create a wholly original logo from scratch. In my judgment, it is more likely than not that Mr Storey and Mr Kelly did access C’s Device during the course of this research.

Judge Clarke also wrote of what she believed to be Storey’s “apparently natural tendency to exaggerate” and avoidance of some questions, emphasis ours:

Mr Storey provided different and inconsistent accounts of the development of D1’s Device, which also conflicted to a large extent with the evidence of Mr Kelly. He often did not answer questions directly, preferring to make speeches about his vision for his business or alternatively seeking to evade questions by speaking in generalities or in the third person plural. He only answered several questions when I intervened. He had a tendency to make impressive statements, which on further investigation or consideration were not quite what they seemed.

The judgement, on that note, mentioned a press quote from Storey in February that said Rich Energy had produced 90 million cans. When asked about the quote, the judgement said Storey explained it as such:

Comparatively, Storey told Jalopnik earlier this year that Rich Energy had sold “in excess of 100 million cans” and that the number was “growing rapidly by the day.”

Judge Clarke, in the end, ruled that the logos are so similar that Rich Energy’s was “more likely to be the result of copying than coincidence,” but the conclusion is mild compared to the rest of her accounts of how this all went down—all of which can be read, in full, here.

Thanks for the email, Sean!