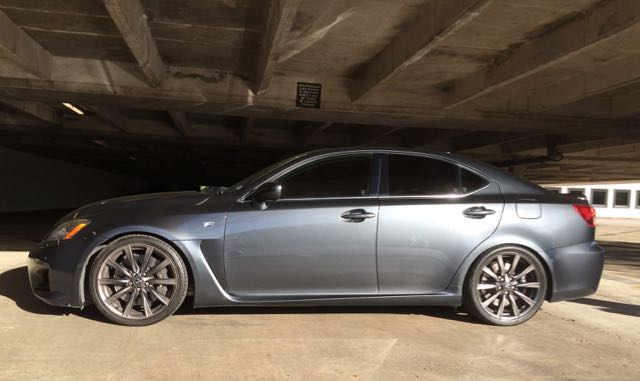 When most people see a 2008 Lexus IS-F, they think, “Oh, that’s a nice looking Camry,” and then immediately go back to checking Instagram on their phones as they continue driving down the freeway at 70 mph.

A five year old kid sitting in the back of a Sienna sees the IS-F, points to it, and says, “Mommy, look, I can point!”

Clearly, the vast majority of adults and children alike are impressed by a five year old’s ability to point and are also unable to recognize the IS-F as being anything special. But, to me, the IS-F stands out.

Admittedly, the differences between a normal Lexus IS350 and an IS-F are subtle. You could say it’s like comparing a pea pod with three peas to another one with three and a half peas. The IS-F is just a bit more aggressive-looking than the IS350 but I think that it’s nicely done. It’s the ultimate sleeper because aside from other car folks, no one would have a clue that the IS-F can be a howling 450+ hp V8 monster capable of going from a standstill to 60 mph in under 4 seconds.

You might think that because my IS-F is a 4-door Lexus, it might be the perfect grocery getter that gets you to the store and back very quickly and enjoyably. Unfortunately, it’s not. That’s because the ride quality of the IS-F is the same as sitting on a wooden cart with wooden wheels with no tires. Actually, it’s more like being on a wooden cart without wheels and then being dragged along on cobblestone by a horse.

I’ve owned this car for a few months now as my daily driver and I’m pretty sure that some of my teeth have come loose during this time. My joints hurt now as a result of living with the harshness of the IS-F. And nobody wants to ride with me. So I have three other perfectly good seats in the car that remain unused. When I sell the car, I hope to get a premium for it since the ad will state, “75% of the seats in the car are untouched and in showroom condition.”

But, the IS-F does start up like a champ every day and I’ve faced no issues–yet. I’m hoping that this car is as reliable as Lexuses are typically known for, but as the mileage creeps up–currently at 78,200 miles–the chances that something will break are slowly increasing.

Yes, I would say that there is a strong possibility that my back will break the next time I hit a pothole.

Every day, my first order of business, as soon as I get into the IS-F, is to put it into sports mode. Sports mode is like Friday at 5 pm. It makes everything better. All of a sudden you have a reason to live when you realize that there are two whole days before you have to step back into hell again. Friday night is possibly the greatest night to ever exist. Sports mode is mostly like that because it fills you with joy. As soon as you enable it on the IS-F, the throttle is more responsive, the steering is tighter and the shifting is crisper. It’s great.

The problem with engaging this mode, however, is that the button that does this is invisible. Because Lexus did such an excellent job with ergonomics and decided to cover up the button completely with the steering wheel, I have to feel around for it. And so, every day, I caress my car–first thing in the morning.

There are other buttons I can’t see either because they’re behind the steering wheel, like the information center button and the parking sensor. When Lexus decided to put in the steering wheel last, they must have realized that they hid some of the most important buttons in the car, and decided to go with that design anyway, since the big boss said, “Do it, or we will send you over to the Corolla department!”

After I engage sports mode, the next thing I do is bump the shift lever into manual mode. Automatic transmissions are so horribly boring, but in this car, the 8-speed auto transmission is buttery smooth and shifts quickly. Because of this, paddle-shifting is way more fun than I anticipated. Not having a standard transmission car isn’t a big deal at the moment. You have loads of torque and speed available to you at any time because a quick flick of the finger results in extremely quick rev-matched downshifts.

The acceleration and noise of the IS-F are tons of fun to experience, but you’re still faced with the reality of the car’s insanely rough ride. Not only is the stock suspension stiff, but add to that shorter springs and what you end up with is a ride that can give you a concussion. I skillfully demonstrate this fact in the video.

With every bump that jostles my internal organs, I feel compelled to slam the pedal to floor because it instantly takes away the pain. It provides the same kind of stress relief as taking a shot of Tequila when dealing with an out-of-control, two year old screaming child. Why do you think parents let their toddlers run around in a restaurant? It’s because they’re all drunk!

Having a lowered car is the worst. I’ll probably never do this again, because it’s impossible to go over speed bumps without scratching up the bottom of the car and you have be careful around everything you encounter on the road.

Because of this, I now have a yellow line across the bottom of the side paneling which adds some undesired graphics to my car.

Let’s say, you’re driving along, and all of a sudden a Selena Gomez song comes on. Of course, you’d want to increase the volume. Who wouldn’t? But because there are 60 increments on the volume control switch on the steering wheel with each click representing an ever-so-slight increase in volume, it takes forever to get the music loud enough to a point where you can sing along to Selena’s latest tunes. In the time it takes for you to adjust from low to medium volume, you can get all your dishes done, finish your laundry and even type up some comments on your most favorite Jalopnik articles.

There is so much brake dust generated that the front wheels will always be darker than the rear ones no matter how many times I try to clean them. There will be a guaranteed difference in the shade of grey. But that’s ok. I’ve come to accept it as a “signature” IS-F look.

Fake Quad Exhaust. I suspecte this before I bought the car but actually confirming it was disappointing. Unfortunately, the stacked quad exhaust look is all fake and the reality is that there are single pipes behind the deceitful facade. Oh well.

Thin Steering Wheel. You can never get a good grip on the steering wheel because it’s so thin which takes away from the handling experience and impacts your ability to steer. Oh well.

Despite some annoyances, I do enjoy the car–that is–if I’m able to drive aggressively. The exhaust note and the speed are awesome and the car itself is solid so you feel confident pushing it. Fortunately, it appears to be reliable so far and hopefully the car doesn’t create any problems other than an accelerated degradation of my physical self.