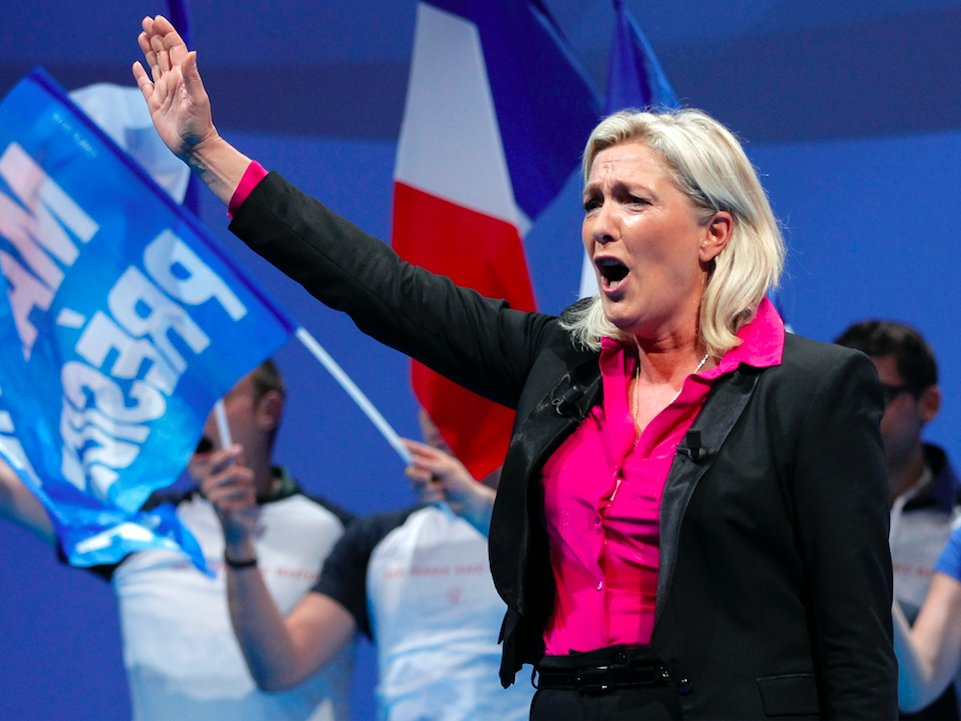 LONDON — With just under one week until the French electorate goes to the polls, financial markets are scrambling for any clue as to what the outcome of the election’s first round may be.

As it stands, four different candidates are polling at around 20%, with centre-left Emmanuel Macron leading the way, closely followed by far-right Marine Le Pen. Most polls put Macron at around 24%, while Le Pen generally sits at 22-23%.

While Macron remains the heavy favourite to win — polls show him defeating Le Pen roughly 65%-35% if the election’s second round is between the pair — the possibility that four separate candidates could make the second round is making investors in French assets increasingly nervy.

That’s most reflected in the recent movements in the cost of French government debt. Traditionally, French debt moves broadly in line with debt from the only eurozone economy bigger than France, Germany. However, as the election has approached, the gap between French and German debt costs, generally known as the spread, has widened significantly.

Since the end of last year, the cost of French debt has skyrocketed, reflecting the possibility of an extreme candidate winning victory in the election.

The yield — which moves inversely to the price — on the country’s benchmark 10-year bond yield has climbed from around 0.65% to around 0.92% now, having hit a high of more than 1.1% in mid-February. By contrast, the yield on the 10-year Bund is at just 0.18%, reflecting its nature as one of the safest havens in the markets.

At that peak in February, the spread between French and German debt hit a high not seen since 2012, when the eurozone debt crisis was at its worst.

The charts below illustrate the changes seen in both German and French debt since late 2016:

On Tuesday, as European investors return from their long Easter break, French 10-year yields jumped sharply in early morning trade, reflecting a perceived increase in the likelihood of the second round of the vote being between Le Pen and Melenchon. The spread between French and German debt opened as wide as 74 basis points at around 7.00 a.m. BST (2.00 a.m. ET) having been as narrow as 56 basis points only a couple of weeks ago.

Generally speaking, the markets see any victory from the extremities of the political spectrum — either Le Pen, or a Melenchon win — as a negative for France’s economy, which will, in turn, push up French borrowing costs. A centrist win, from either Fillon or favourite Macron, would be a market positive for France.

“The risk for a European Union (EU) referendum, debt redenomination (into the French Franc) and nationalisation, while very remote, also cannot be ignored given the impact on sentiment and the speculation this provokes in markets generally. We believe this will put renewed pressure on French OATs if Le Pen emerges as President,” Nick Leung, a research analyst with Wisdom Tree, which manages around $44 billion of assets said in a note earlier in April.

Elsewhere in the financial market movements related to the French election, the euro is likely to hit parity with the dollar regardless of whether Marine Le Pen is victorious in the French presidential election in May, according to strategists from Deutsche Asset Management, the money management arm of German finance giant Deutsche Bank.

While the single currency should catch something of a bid if the election goes as currently forecast and Le Pen loses in a run-off to centrist candidate Emmanuel Macron, any rise will just delay the inevitable fall of the euro to a $1 valuation, a person with knowledge of the £607 billion asset manager’s forecasts told Business Insider last week.